When elite level BMX racer Collin Hudson started school at Colorado Mesa University, he wasn’t a mountain biker. But then some friends talked him into racing the dual slalom for the university’s collegiate cycling team. They knew his BMX background would serve him well, and they were right.  With his degree in marketing recently completed, Hudson, 23, now finds himself in the enviable position of racing among the best mountain bike pros in the world at events like Crankworx and the World Championships. We caught up with the Grand Junction, Colorado-based rider after an exciting Crankworx round in Rotorua, New Zealand, where Hudson ended up taking second in the pump track final against his Airborne Cycles teammate and fellow Stan’s rider, Tommy Zula. 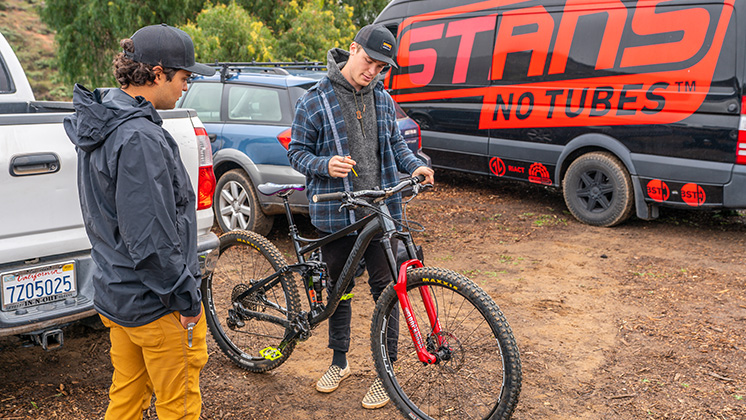 Stan’s NoTubes: The Crankworx final in Rotorua was one of the most exciting rounds of pump track racing we’ve seen. What was it like for you? Collin Hudson: Pump track is really unpredictable, so it was wild that I was able to perform exactly how I wanted to all night. It was even more crazy to race my teammate in the final round. Neither of us were the fastest qualifiers, but we both knew we had the speed to win the race. When Tommy and I race each other, we push each other to a whole other level.  We crossed the line, and I saw the screen was at first showing us both as winners because it was a dead tie. That was wild. I’d never tied in a pump track round before, especially in a championship round. I wasn’t mad when Tommy ended up beating me because it was a good race from start to finish. I was stoked that I could perform like that, and at the end of the day, it was great to have us as teammates go 1-2.

SNT: What’s going through your head when you’re lined up in front of all the cameras and spectators against your teammate, who also happens to be the current and first-ever pump track world champion?

CH: It’s fun, but it’s mentally challenging at the same time. He plays a lot of mind games in a good kind of a way. I know how quick Tommy is and that he’s one of the fastest guys in the world. Neither of us wants to lose to the other, but we have a mutual respect for each other and will help each other out. And we had just lined up against each other four days earlier in the dual slalom.

SNT: Tell us more about the mind games.

CH: It’s simple stuff like him telling me that I got lucky because I had the fast lane first. Or he’ll say, “Oh man, you’ve been riding so good all day; I’ll start packing up right now,” even though we both know he’s riding just as fast. He’s also said to me, “I’m the world champ, so you’d better watch out!” I’ve been racing Tommy for six years, and I’ve experienced a lot of this, and now it’s just something I laugh at and appreciate.

SNT: The commentators were saying that one lane was faster than the other. Was that your experience?

CH: Yes, I’d have to agree that the one lane was probably 0.05 to 0.10 seconds quicker depending on how you rode it. The track was deteriorating quite a bit on the right side. Mentally if you had the left lane, it was easier to know that you were going to perform and make less mistakes.

SNT: A few days prior to the pump track, you lined up against and were eliminated by another Stan’s rider, Kyle Strait, in the dual slalom. How was it being back on course lined up against Kyle after what happened in 2019?

CH: Last year at the U.S. Mountain Bike National Championships in Winter Park, I had a major accident while racing dual slalom against Kyle. I put my front wheel over one of the corners and took the blow of the corner with my body. I ended up bursting my pancreas. They said I had a seizure out on track while I was knocked out. I was in the hospital for two days before they did surgery. It turns out that there were complications. They took out my spleen and a quarter of my pancreas. I had to take six months off following that accident, and it was weird to come back and end up against Kyle again in the semi-finals.

SNT: Did you do any other events while at Crankworx in New Zealand? C

H: I trained for speed and style while I was there, but when the event came, it was really windy, and there were big jumps on the course. Due to a combination of not having been riding jumps of that size while recovering from my crash and the wind, I didn’t think I had the tricks to win. So I ended up sitting out speed and style and focusing on the pump track, which I had the potential to win.

SNT: For an inside look at Collin's 2020 Crankworx experience, here's his recap video.

SNT: What other big events are you looking forward to this season?

CH: Definitely Crankworx in Whistler in August. There I plan to do all the events starting with enduro at the beginning of the week, then air downhill, whip off, speed and style (if all things go right and my head’s in the right place), pump track, slalom and finally downhill. What’s great about Whistler is that I can drive up there and take all five bikes with me that I’ll need. I’m also hoping to do Crankworx in Innsbruck, Austria, in June, but I’ll wait to see how the schedule plays out and how expensive it is to get three or four of my bikes overseas. This year, the Redbull pump track has started a new world championship series that includes another three events plus those at Crankworx, and the U.S. Open had a pump track event two years ago and may have one again. And finally, there will be the second running of the pump track World Championships, which Tommy won last year.

SNT: Tell us about your transition from BMX to mountain bike racing. How and why did you make the switch?

CH: I was doing well in BMX and had just gotten a few junior elite podiums at the world championship level. Then I started school at Colorado Mesa University. The pace of life changed, and my BMX career slowed down. I was encouraged to race dual slalom in collegiate races. My best friend growing up was a pro downhill racer, and I’d ridden with him a few times, even going to a few races with him, so I said “yes” to racing mountain bikes collegiately. I fell in love with the sport and the freedom of racing mountain bikes. I love how it is mentally because everything is on you. I had gotten hurt a few times racing BMX including one time at the 2014 BMX Junior World Championships when I came together with another rider, shattered my elbow and broke both collarbones. I had to get flown out of there and went straight into surgery. 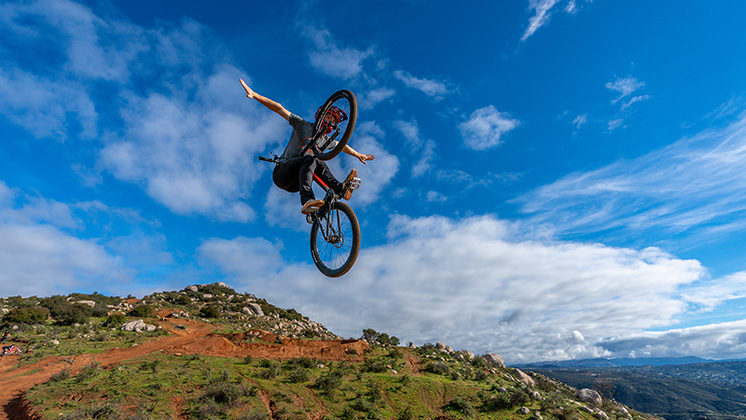 In mountain biking, you ride your own separate track even in the head-to-head events like dual slalom and pump track. You have to straight up be better than the other guy. They can’t interfere with your racing at all. If you make a mistake, it’s on you. It’s the same with downhill. You’re the only one on the track.  I also love the experiences and the mentality at mountain bike events. I look forward to them, and I’m excited when I go to them. Having grown up doing BMX, racing mountain bikes was a way for me to change things up.

SNT: Do you still race any BMX?

CH: I’ll race the World Cup this year in the U.S. I race locally, too, to support the scene. I still love racing BMX. It’s what I grew up doing, and I did it for 15 years, and now it’s at the point where it’s just for fun.

SNT: What advantages does coming from BMX give you in mountain biking?

CH: I was lucky to get a decent set of bike handling skills from growing up racing on European BMX tracks. It was a treat to go over there and race those tracks, which are so technical. I learned from a young age that I always needed to get better. I learned to push myself every day to become better and get more skills.  Growing up in BMX, I was never the best rider, so I had to be the most skilled rider. There were always kids that were bigger in BMX, and that was a huge advantage for them. I was always trying to jump the biggest jumps on the track, and I also rode with an Olympian that helped me push myself physically as I was always trying to prove that I was a worthy opponent. I’m really confident riding my bike no matter what the track is, and now I get excited when the tracks are not simple and are harder to ride. I can usually figure out a track pretty quickly, and I can generate a lot of speed in a short amount of time--whether it’s pumping or sprinting. The power aspect is the most beneficial, but I also enjoy the mental ease of mountain bike racing because none of the other guys should affect my racing. I should be able to grab a medal if I’m lining up and performing at my best.

SNT: So we have to ask, what Stan’s wheels are you riding on all those bikes you mentioned?

CH: I ride Barons on my slope bike and hardtail (pump track bike). My two enduro bikes have Flow EX3s. I love that my wheels are light and so easy to set up out of the box. They are world-class competition grade wheels, and I don’t have to change anything--hubs or rims. The quality is great, and I enjoy that I can pick the color of stickers and the spoke nipples to get the exact set of wheels that I like.

SNT: Any advice for those looking to get into mountain biking or BMX?

CH: Grab a friend and just go have fun! Try it and don’t worry about racing. Learn to ride your bike first. Don’t take it too seriously--if you do, you’ll end up not having fun and will resent the sport.

SNT: What do you like to do when you’re not training and racing?

CH: Hmm, that’s hard to say. I live a pretty fast life, so if I have any down time, I just like to blow off steam and decompress and get ready for the next big thing. I hang out with my friends and my girlfriend, Gwendalyn Gibson, who’s a World Cup cross country racer, so our lives revolve around cycling. I also love skiing--it’s one of my favorite pastimes.

SNT: We can’t help but notice your relentless smile and enthusiasm. Where do they come from?

CH: My guess is that it’s because if I’m riding my bike, I’m having fun. I love competing. I’m a little camera shy when doing interviews, so I just smile a lot. This weekend, the commentators were calling me the “human emoji,” which cracked me up.

I’m always trying to stay humble, and to be honest, I enjoy the racing more than I enjoy the attention. I try to brush off compliments, and that often comes off as a smile. Bottom line is that if I’m on my bike, I’m truly having fun. If I’m not having fun, I wouldn’t be on the bike.