Meet Montanus: Friends, Bees, and Bikepacking For A Better World

Meet Montanus: Friends, Bees, and Bikepacking For A Better World

Giorgio Frattale and Francesco D’Alessio are two Italian friends from L’Aquila who love to ride their bikes and travel. Together as Montanus, they also like to inspire others to go outside and explore. Both men had been looking forward to an upcoming trip to Chile in early 2020, but the onset of the coronavirus pandemic abruptly canceled their plans. While subsequently under strict lockdown at home in Italy, they shifted gears toward enjoying, exploring, and virtually sharing their own beautiful backyard: the Abruzzo region of Central Italy, about 100km from Rome.

What resulted was Bee Wild Bee Free -- an award-winning video that combines bikepacking and beekeeping and encourages others to be more environmentally conscious. We interviewed Giorgio and Francesco to learn more about them and their latest video.

Stan’s NoTubes: What exactly is Montanus The Wild Side?

Montanus The Wild Side: It’s an inspirational project to bring people to the outdoors and get them exploring. It’s a project that was born on social media from the sharing of the photos of our adventures. It’s not just about going outside and traveling; it’s important to go outside wherever you are.

SNT: How and when did Montanus come to be?

MTWS: It was born out of a tragedy. In 2009, we had an earthquake, and lots of people died in our city. It destroyed our city, and many of us had to go outside. For one year, we lived outside while we rebuilt.

[Editor’s Note: According to Britannica.com, the magnitude 6.3 earthquake that struck central Italy was the worst in Italy in more than 30 years. More than 300 people died, and an estimated 60,000 were left homeless as aftershocks continued to shake the community for a month following the original quake.]

SNT: So you had no choice but to be outside so much after the earthquake, and you began exploring the nearby mountains more. When and where did bikepacking come in?

Bikepacking opens your mind, and you see all the environment surrounding you. It opens your mind as to how we are a part of nature and how we can and should take care of it. The first things we had to learn were [to] Leave No Trace and to stay on the trail.

In our first bikepacking experience in 2014, we wore huge backpacks while riding. It was more like backpacking on bikes. We wanted to explore! We really started “bikepacking” in early 2015, when we moved the gear from our shoulders to our bikes. Our first big trip was to the U.S. where we rode the White Rim Trail and the Kokopelli Trail. 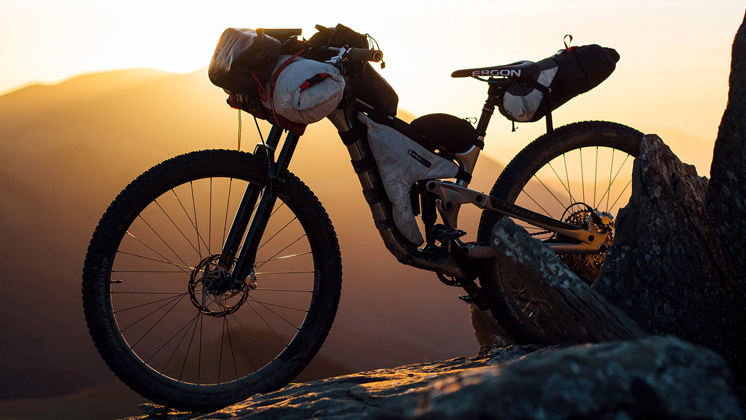 SNT: You were supposed to go to Chile early last year, but coronavirus forced you - and all of us - to stay home. Then how did you get the idea for Bee Wild Be Free?

MTWS: Yeah, we were going to go to South America in February of 2020 but had to completely change our plans. Naturally, we still had travel on our minds, and at that time, we were working with our bees. So we made the connection between bikepacking, bees, and the environment and wanted to communicate something about that through the bike media. The content is really about the environment and nature; it’s not just about bees. We are part of an entire ecosystem, and we have to respect other species. Then we can all live in a better way in this world.

SNT: The scenery in Bee Wild Bee Free is beautiful. Where did you shoot it?

MTWS: The video was shot in our national park, the Gran Sasso National Park, which has the highest mountain range in Central Italy. 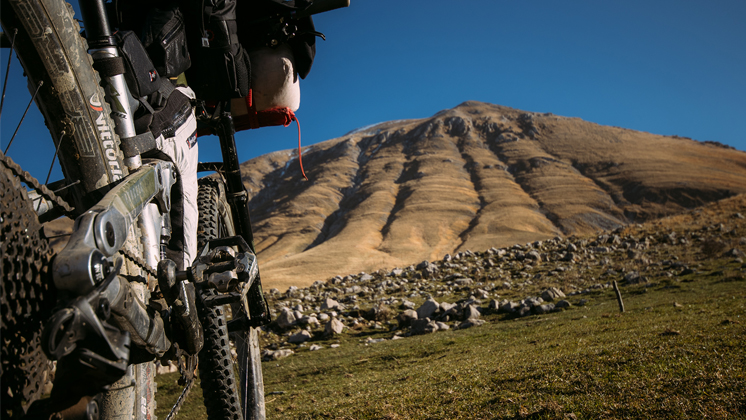 SNT: How and when did you get into beekeeping?

MTWS: Two years ago, Giorgio’s cousin, who was a beekeeper, gave us two bee families, so we got started with two hives. We have them for our gardens. We still have two, and we want to have more for this coming spring.

SNT: What do you do with the honey and any other bee-related products that you get from your hives?

MTWS: The honey itself is the main thing, but we also use the beeswax in making a lip balm that we wear when we go in the mountains. And we make creams using the propolis, which protects the hives from bacteria. Bees use propolis to seal their hives, but it’s also important for human health, too, because of its antibacterial properties.

We just have a little production for ourselves, and mostly we just use the honey for ride snacks. We don’t sell it at the moment. Giorgio likes to eat it with a spoon [laughing]. Francesco likes to eat it with cheese. We never use it in hot beverages because it loses its properties after 40 degrees Celsius. Then it is just sugar. 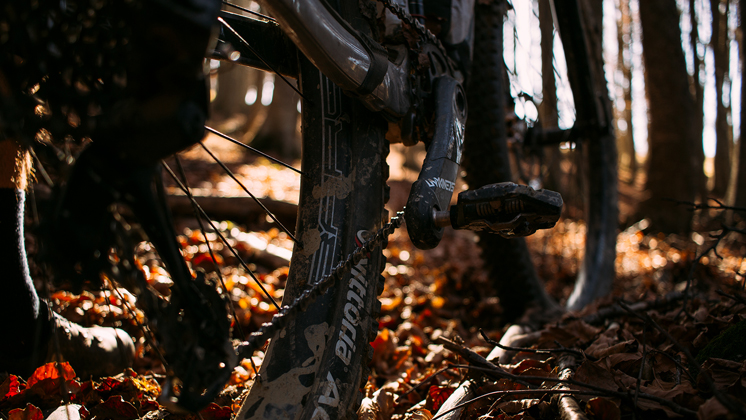 SNT: We often hear that bee populations are dropping. Why is that?

MTWS:  Human beings do everything for profits, and that means using lots of pesticides.

It’s trouble for humanity that we consume more than we need, and we waste a lot. Bees are just one species, and they are fun, but this really is an issue that goes way beyond bees and to all species on the planet. We have a penchant for bees because of their honey, but it’s not just bees that are endangered.

Some good news, though, is that in the last year, consciousness has been increasing about the need to save bees by using less pesticides. Lots of people in our area are becoming beekeepers and understanding more. In Italy, there even are spots on TV now about saving the bees.

SNT: Do you have any advice for someone looking to help grow the bee population by getting into beekeeping?

MTWS: Have patience. Bees are very fragile, so you have to give lots of attention to them and their environment. They have a lot of enemies. But it’s beautiful to just sit behind the beehive and look at them go out and come back with their legs full of pollen. They are fascinating. 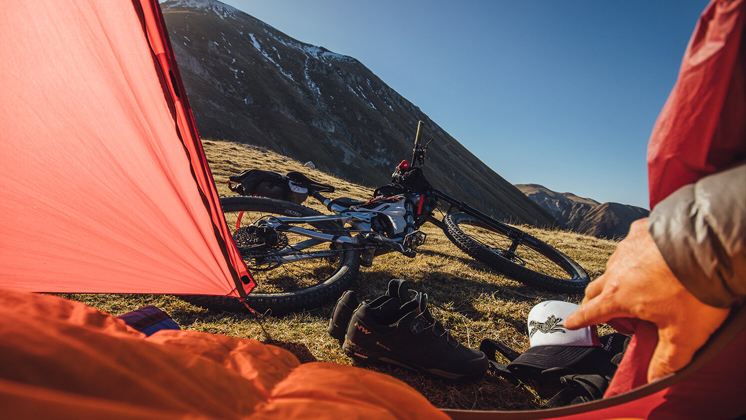 SNT: So there are two questions that, of course, we just have to ask... First, have you ever gotten stung?

MTWS: Yes, sometimes, and especially back when we got our first family of bees. If you are not allergic, it is not a problem. Some say that the beekeeper gets healthier with stings. I don’t know if it’s true, but it’s worth it for the honey.

SNT: Second, why do you ride on Stan’s wheels for your adventures?

MTWS: We ride the Baron carbon 29” wheels because they are strong and very reliable. We’ve always used Stan’s wheels on our trips because we can trust them not to give us trouble.

And we don’t like flashy graphics, so we also like that we can have gray stickers on black carbon.

SNT: Can you tell us anything about your next project?

MTWS: No, it’s top secret! [laughing]. We’ll just say that we were hoping to go overseas, but it’s not possible at the moment due to the pandemic. 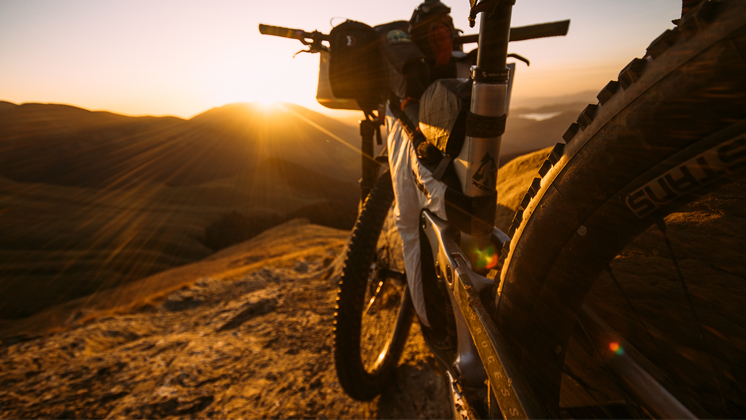 SNT: Ok, any parting thoughts you want to leave us with in the meantime?

MTWS: At the end of the video, we have text that says, “Save the bees, save yourself.” While bees are little creatures, we are speaking about them because they are very important for the entire ecosystem. That’s because of pollination, which gives us food for people.

So our video is not just about the bees. What it’s about is that if you respect all creatures, and if you respect flowers, then you are respecting yourself. The most important lesson that bees teach us is how to live with respect. Everyone has a role and should respect each other. We all know how to collaborate as a family, and bees are symbolic of that cooperation.

All photos courtesy of Montanus The Wild Side.

Special thanks to Giorgio’s wife Silvia for translation assistance during the interview for this article.