The first time Ethan Nell got to watch the Red Bull Rampage, he was stoked. He’d grown up nearby racing dirt bikes and also doing some mountain biking and dirt jumping whenever his dad didn’t have time to take him to the motocross track. Fast forward a few years, and Nell had become a freerider, too. So having dug for a few Rampage stars over the course of several years, he was even more stoked when he finally got the invitation to compete. An impressive third-place finish as a Rampage rookie catapulted him into the limelight. We caught up with Nell, now 23 years old and one of Stan’s newest athletes, to learn more about him and his career.

Stan’s NoTubes: What kind of riding is your favorite and why?

Ethan Nell: The mountain bike riding here in Utah is unbeatable, and the terrain is amazing. I grew up in St. George and still live here today. I love to ride exposed, gnarly stuff like in Virgin. And I’m into big jumps. 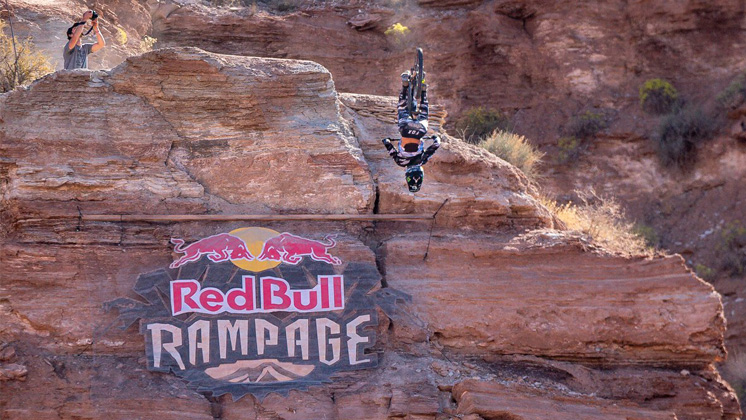 SNT: It sounds like Utah is a good fit for you.

EN: I’m usually gone traveling in the summers, but when I’m here during the winters, it’s perfect. The dirt is wet then, and we’re filming off-season videos. Typically the Canadians and Europeans can’t ride much during their winter, so they come here. Everyone stays with me, and we ride together, so I have a lot of people to ride with. The moto riding here is really good, too. 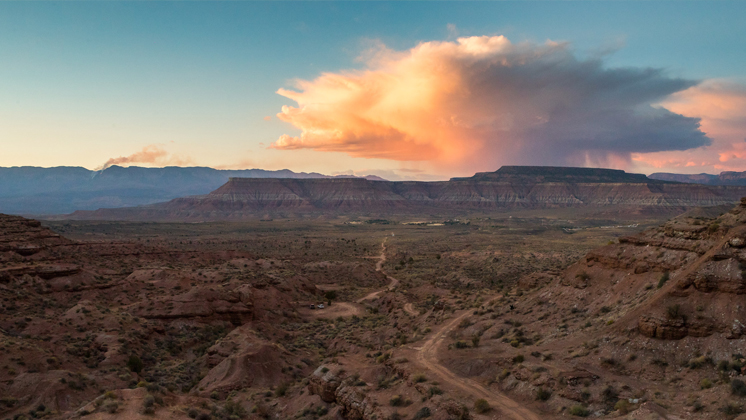 SNT: Tell us a little more about how you went from motocrosser to freerider?

EN: My uncle is super into mountain biking, and he took me to watch Rampage in the late 2000s. It got me super stoked. At the time, I was racing dirt bikes, and then I kind of got over that. I got into mountain biking, and I met everyone from Rampage when I was around 16 years old. I dug for Andreu Lacondeguy, and I was engulfed by the whole scene. It just took off for me. Next thing I knew, I was traveling around with all these guys riding mountain bikes.

It led to my getting into riding the Fest Series, which is a for-riders-by-riders kind of event. When there is no coronavirus, there are usually five or six Fest Series events per year all around the world. For example, Nico Vink has one in Belgium; Sam Reynolds has one in South Africa; and Graham Agassiz has one in Canada. They have big dirt jumps for downhill bikes, and by big, I mean 50-100 feet big. They feature rider-judged competitions for things like best trick, best ride, and best style. We go to each spot for a week and film. It’s not a contest like where you have to wait on the wind. We ride when we want. It’s super fun. 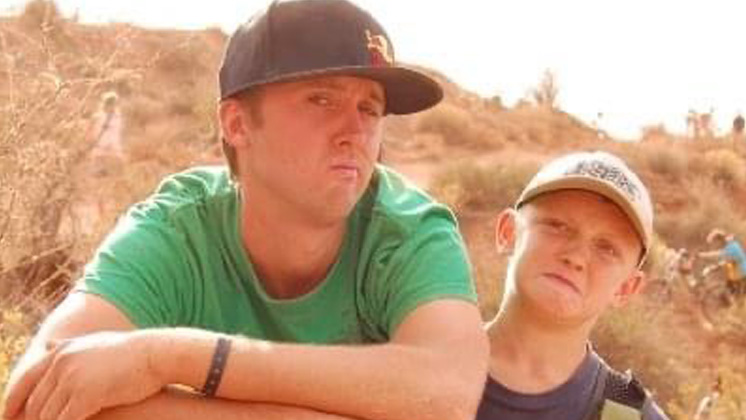 SNT: And is that what led to getting into Rampage?

EN: Rampage has the top 20 freeride athletes in the world, and it’s not something that’s easy to get invited to do. I got into things pretty quickly after I met everyone at Rampage. The main Rampage guys are the dudes that run Fest Series. I was gone for a long time and did every Fest Series stop in 2017. It’s when I blew up. But it wasn’t until after I had also dug for Nicholi Rogatkin for three years that I got the invite. I had to prove myself on the bike with my skills, going to other big events, and putting out good content. I was on the alternate list for Rampage one year, and the next year, I was in. 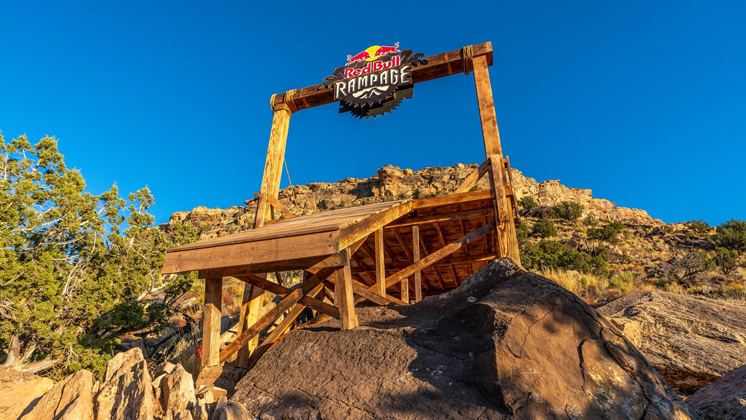 SNT: You finished third in your first year at Rampage in 2017 and again in 2018. What was that like?

EN: The first year I did Rampage was crazy because I was the youngest rider, and I had never done it before. After having watched that event since I was super young, being able to be in it was super cool. I podiumed, and it took everyone by surprise. It was cool because no one was expecting it. My career took off because everyone suddenly knew my name.

The year after, I podiumed again [with another third place - ed.], and it secured my spot. There wasn’t a Rampage last year, but to date, I’ve ridden it three times. 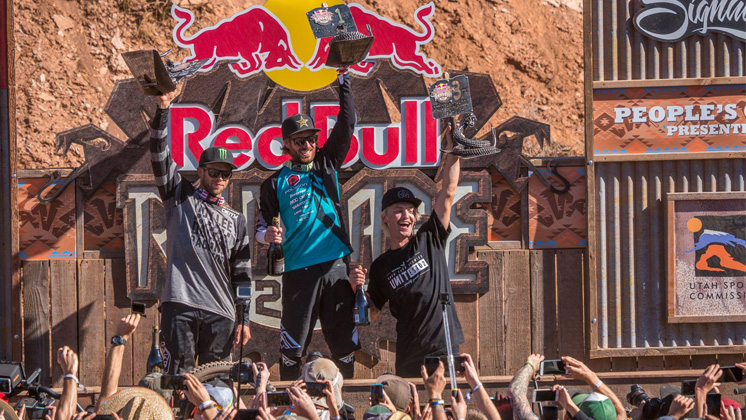 SNT: As you just mentioned, there was no Rampage in 2020 due to coronavirus. What was this past year like for you?

EN: The year was pretty lame. There is so much more that comes along with Rampage, especially living in Utah. All of the athletes that are my friends come one to two months early to hang out and get used to the terrain. Not having everyone come ride and have big sessions in the months before Rampage was the biggest bummer. It’s always such a good time to refresh and get better on your bike as you ride with all those other dudes. I missed having that competition. There are so many ups and downs that come with Rampage, and I missed all of that. 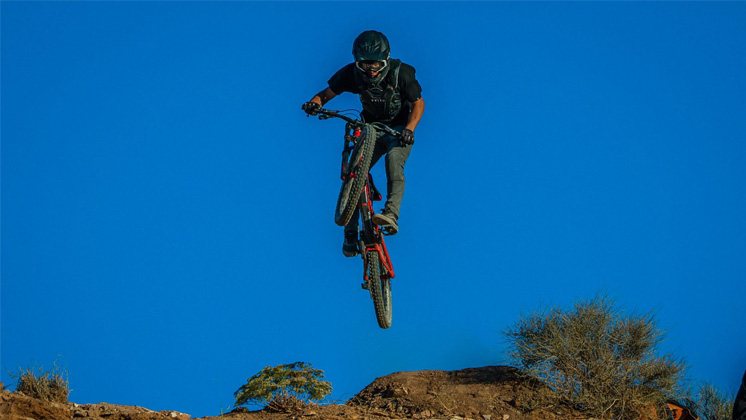 SNT: What are your expectations for events this year?

EN: We haven’t heard anything yet about Rampage for 2021. I just came back from Johny Salido’s event in Mexico, and it went pretty well. It was gnarly with everyone having to get tested for COVID-19. If you tested positive, you’d get stuck. It was kind of a nightmare. We did it in Mexico because Mexico is a lot more chill.

Most of our events are normally in Canada or Europe, or people are coming from there, and it’s hard to say what will happen. Hopefully, things will calm down, and Rampage can happen since it’s in October, but last year’s cancellation didn’t come until just one week before the invites were supposed to go out.

My other favorite events besides the Fest Series are Dark Fest in South Africa and Audi Nine Nights in Germany. I also compete at Crankworx in Whistler every year, usually for the best whip, the Deep Summer photo challenge, and Speed and Style. 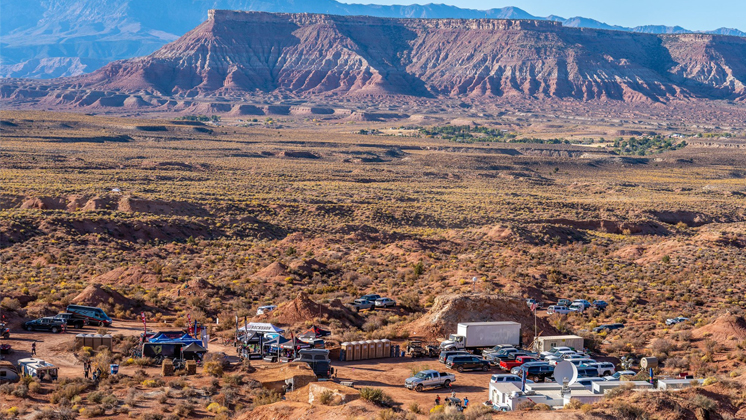 SNT: Besides events, what else are you looking forward to in 2021?

Since it’s hard to say what will happen with events, what I’m looking forward to most about this coming season is finishing a Monster Energy project with Tom van Steenbergen. It’ll be a supercross commercial, too. I love being able to film in Virgin!

I’m also excited that Reed Boggs, DJ Brandt, and I are filming our own movie. We’ve previously filmed a few segments in New Zealand and in Hawaii. We’ll be working on finishing that this year in the States -- probably in Utah and Colorado. 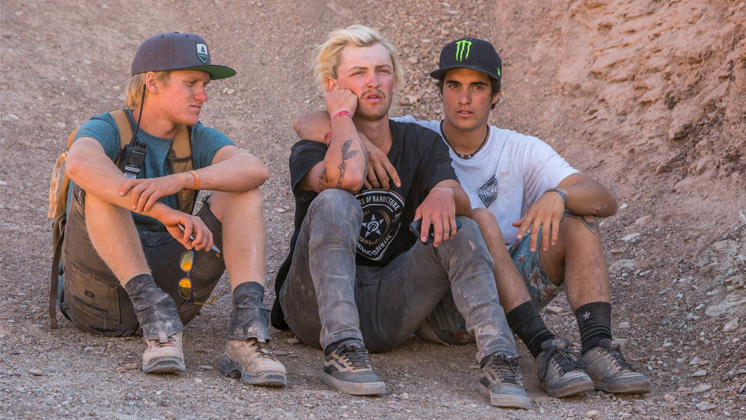 SNT: Speaking of Reed Boggs, we understand you two are friends. How did you get connected, and how are you connected now?

EN: In 2014 or 2015, we both dug for Nicholi Rogatkin for Rampage. My parents had a house in St. George, and we were living on an acre of land. I had a slopestyle course set up in the backyard. They had a few extra rooms open, and after Rampage, Reed came from Ohio and moved in. He lived there for three years, and we traveled together to events.

Then in 2019, I bought a house, and he moved in with me. So we’ve lived together for five to six years. 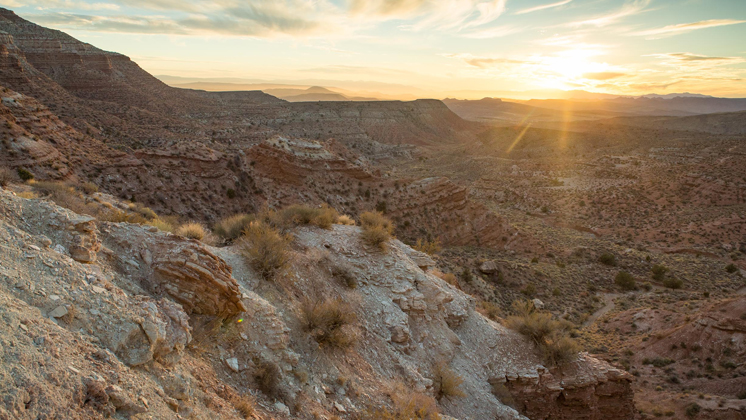 SNT: We’ve heard some rumors of some interesting special features at your current house. Will you please elaborate?

EN: The house I bought in St. George actually came with some property in the backyard although there are not many like that there. I built dirt jumps so we could ride and have a good time. But I just sold it, and I’m moving soon.

I’m hoping to buy a new house and property so I can build larger scale jumps for freeride mountain biking and freestyle motocross. St. George is the number one or number two fastest growing town in America, so it’s a good time to sell and a tough time to buy. What will hopefully be my new place is closer to Virgin - only about 30 minutes away.

SNT: How has your motocross background helped you when it comes to freeriding for fun and competition?

EN: Dirt bikes are my other big passion besides freeriding. I’m good friends with Axell Hodges and Jeremy Stenberg, the top motocross guys. Riding with them a lot helps my mountain biking. It makes me numb to big hits and air time. Being able to ride both disciplines helps me figure out the technical side and getting big air time. 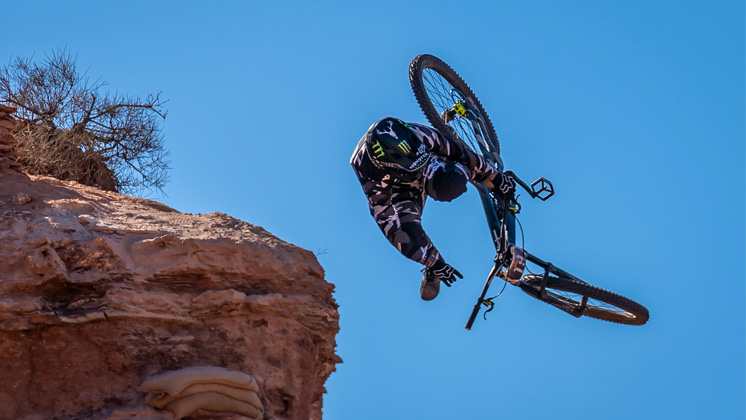 SNT: Looking long and short term, what do you hope to do on a bike? 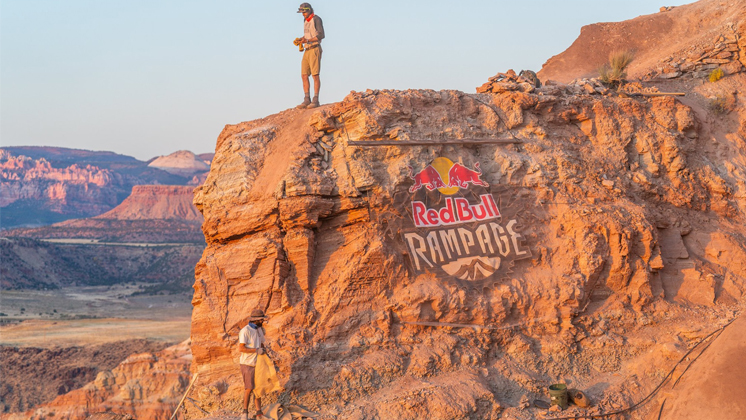 SNT: What do you like to do when you’re not riding a bike or riding a moto?

EN: Surfing. I also love getting into the mountains for some hunting and fishing. I have a rally car, and I like going to “race” dirt roads, but really I’m usually just riding dirt bikes or bikes.

SNT: What Stan’s wheels are you riding and why?

EN: It’s my first year with Stan’s, and there’s a pandemic so I’ve only gotten one set of wheels so far. They are MK3s. I just rode them in Mexico and have been riding them out in Virgin, and I love them.

SNT: We’ve heard that you still ride 26” wheels. Is that true? 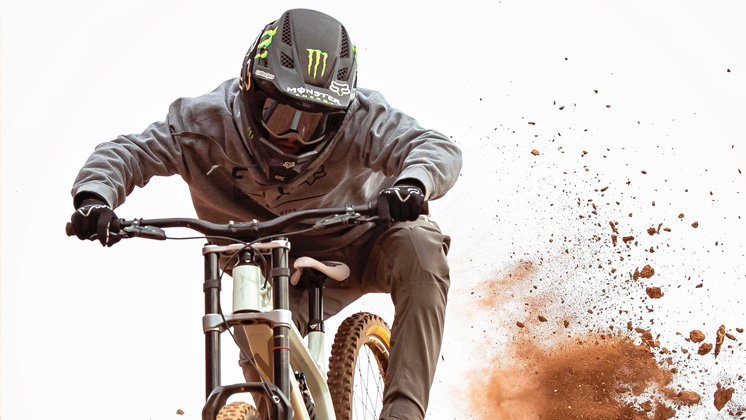 SNT: Have you ever tried any other wheel sizes, and what was your impression of them?

SNT: Taking a step back and looking at the bigger picture, which riders have influenced you the most, and which do you look up to the most?

EN: DJ Brandt, Cam Zink, Andreu Lacondeguy, and Brandon Semenuk. I enjoy watching all of them ride and their progression in the sport. 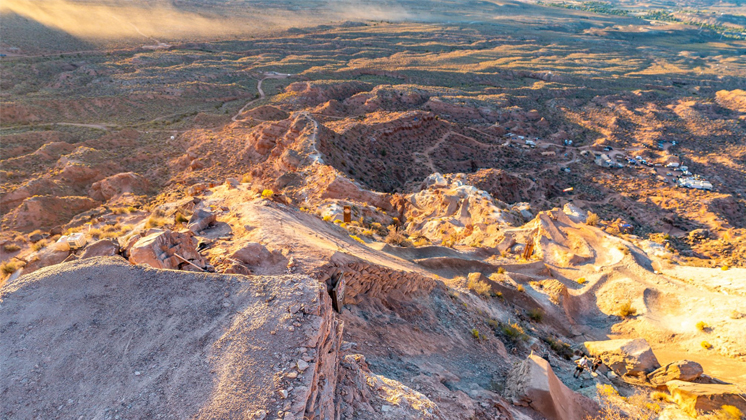 SNT: Let’s wrap this up with one final question. Based on your experience coming up the ranks, any advice for up and coming riders who are looking to make it as a freeride pro?

EN: Ride your bike to have fun, and let your style do the talking.

All photos by Kenny Wehn except where indicated otherwise.

In addition to Stan’s, Ethan Nell also rides for Monster Energy and YT Industries. You can follow him on Instagram at @ethannell. 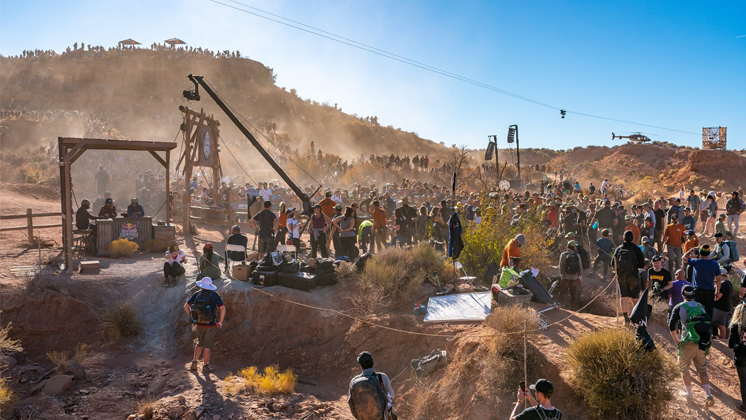