If all goes according to plan, all three riders on the Pivot-Maxxis pb Stan’s NoTubes Team will line up for the 2020 UCI Cyclocross World Championships in Dübendorf, Switzerland next February. Team Manager/Rider Courtenay McFadden and up-and-coming pro Grant Ellwood hope to be there wearing the stars and stripes jerseys of the U.S. National Team, while their younger teammate Ruby West is likely to represent Canada. Photos by Drew Coleman - LCN PDX. 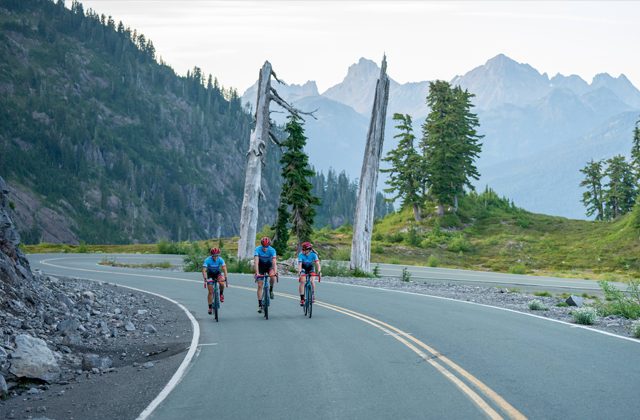 McFadden never really set out to start a cyclocross race team. The 34-year-old from Bellingham, Washington, used to race on her own as a privateer. Fast forward a few years, and she’s now at the helm of a small but promising team of three. 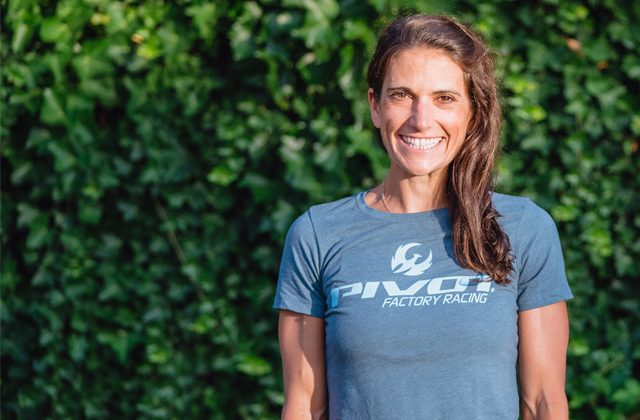 Both Ellwood, 23, and West, 20, ended up on McFadden’s team thanks to recommendations from others on the close knit ‘cross racing circuit. McFadden now serves as both the team’s manager and one of its riders while both of her proteges focus on working their way up the ranks. 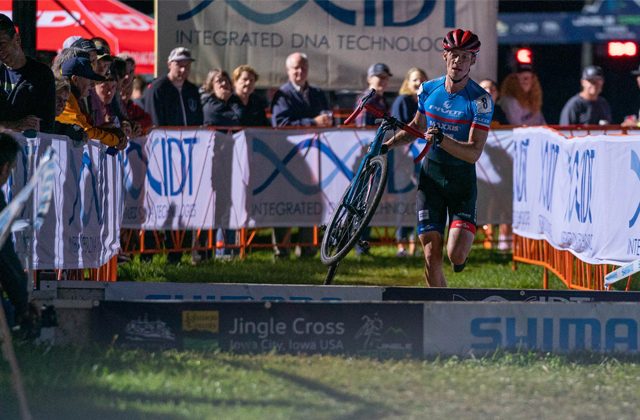 “I’d met Grant a few years ago, and he’s fast and very much still coming into his own as a racer,” said McFadden of the Boulder-based rider who is in his second year of racing among the elite men. “He just graduated from college this past spring and is spending this fall racing ‘cross full-time. He has lots of potential on the ‘cross circuit.” In contrast, West, who is from Dundas, Ontario, is still in school and now in her second year at Bishop’s University in Sherbrooke, Quebec. She is studying health and sports with a minor in business. 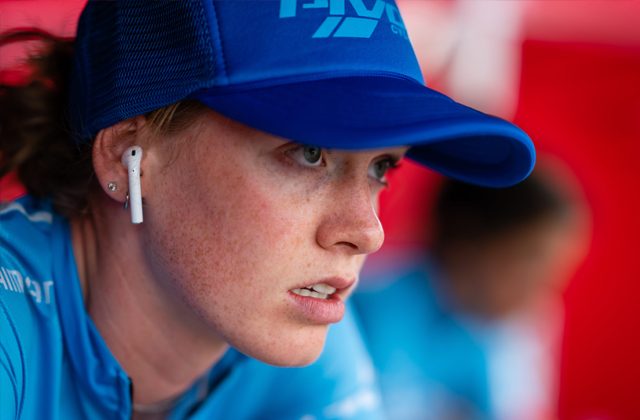 “When Ruby joined the team, I didn’t know her at all, but we chatted, and she seemed great,” said McFadden. “She is young and fast and still improving as a racer.” West has already won the Canadian under 23 women’s national championship title three times (that's 100% of the years that the category has actually had its own world championship race to date), and also represented Canada at Worlds. Day to day, McFadden balances her own full-time training and travel with managing their three-person team and all of their logistics. So far, all is on track for the trio’s first season of racing together. 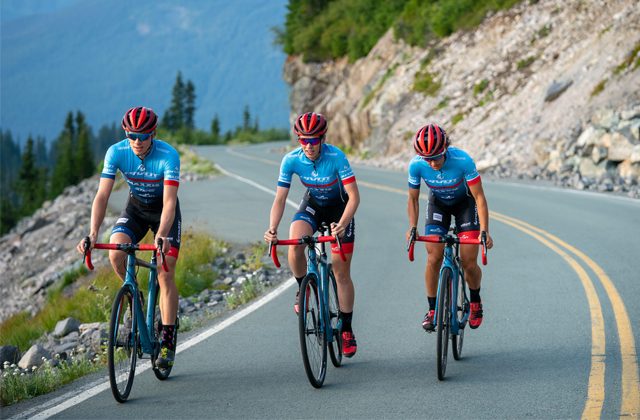 “It’s been going well, but we’re really just getting going,” said McFadden. The team’s season kicked off in Rochester, New York and continued at the early season Jingle Cross and Trek World Cups in Iowa and Wisconsin, respectively. While Ellwood did not qualify for the World Cups, he still showed up in Iowa and logged a sixth place finish in the UCI-categorized C2 event that same weekend. McFadden herself crossed the line just outside of the top-10 in 11th place, while West put in an impressive 19th place ride.  A week later in Wisconsin, McFadden was 11th again, and West was 12th, her best career World Cup result to date, putting the up and coming young Canadian on the Under 23 World Cup podium for the first time as she simultaneously celebrated a second place finish for her age category. “Together we are all striving to be toward the front of the UCI races and ultimately have a successful world championships. Along the way, we want to be a recognizable team on the UCI circuit,” said McFadden. “Ruby also wants to win the Canadian under 23 women’s national title again and the under 23 women’s Pan American Championship title while Grant is steadily working his way up into the top five among the elite men. He hopes to finish in the top six at the U.S. National Championships.” 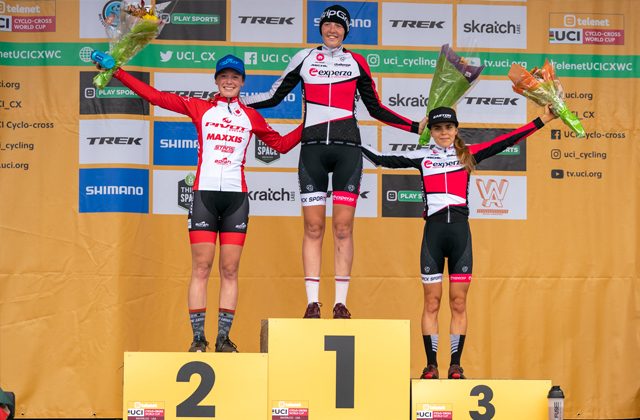 McFadden says her own goals are primarily to help Ellwood and West succeed. As for her racing, she hopes to do well - perhaps even making the podium - at the U.S. Cyclocross National Championships, which will be local to her when they are held in mid-December in nearby Tacoma, Washington.  “I’ve never raced Nationals at home before - it’ll be exciting. Not having to travel far to do Nationals is going to be really a big deal, and the ‘cross community in the Seattle area is fantastic,” said McFadden, who noted that the West Coast doesn’t get many big ‘cross races, making it a big deal to be hosting ‘cross Nationals. “And while I haven’t raced at this year’s Nationals venue in a few years, they are doing some races there this fall, so I’d love to go check them out if I’m home when they’re happening. I’m expecting the course to be technical and there to be a lot of running.” What They’re Racing Every weekend the Pivot-Maxxis pb Stan’s NoTubes racers take to the start line on Stan’s Grail CB7 wheels. What they love about them are their light weight and durability. 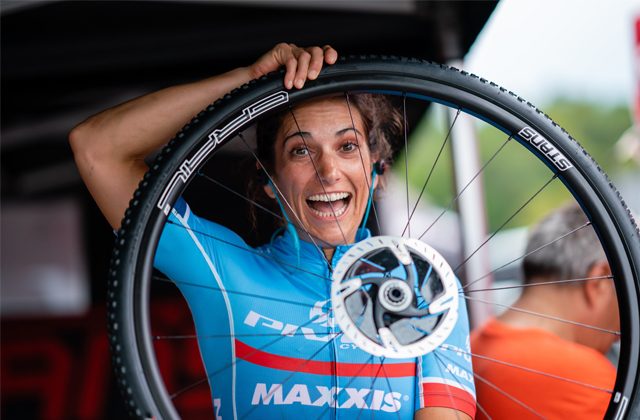 “Weight matters with ‘cross because you have to pick up your bike ALL the time,” said McFadden. “It’s so much easier to pick up the Grail CB7s and run with them, and then there’s also the fact that they mount up so easily when setting them up tubeless.” McFadden observed that perhaps even more importantly than her wheels being light is the trust in them that she has. “I’ve been known to crack other brands of rims in the past, but I’ve never cracked my Stan’s wheels. They’re durable and ride well. That’s important as a racer. You have to trust your equipment and have confidence in it to ride well.” ‘Cross Trends With it being no secret that ‘cross race participation has been declining in recent years, McFadden remains optimistic that the 2022 Worlds being held back in the U.S. will help boost what has become a struggling cycling discipline. They will be Fayetteville, Arkansas. 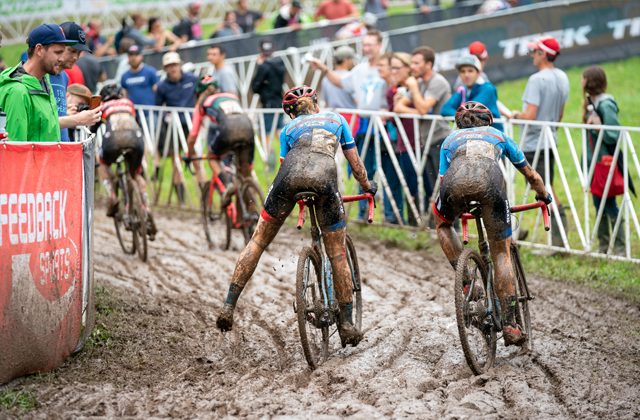 “While I’ve noticed a decline in the number of riders participating at the UCI races, I think it’s still going well in the Pacific Northwest,” she said. “I hope the downward trend won’t continue long term. Within all sports and sub-disciplines, there are dips and rises. As promoters and as racers, it’s our job to help keep people in the sport and get new people into it. Cycling is an expensive sport, and it’s tricky to get more people engaged.” In some ways the cancellation of several West Coast UCI-categorized races this season has been a good thing for ‘cross. McFadden noted that it’s had the effect of concentrating more of the top racers at the same remaining big races, meaning that there is better competition at any given race throughout the season, pushing everyone to race better. 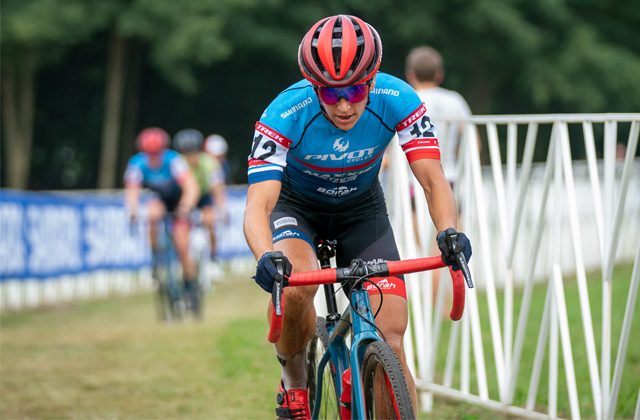 When asked if she had any ideas for spurring a burst of new interest in ‘cross, McFadden brought up the topic of lowering the barrier to entry to get more riders to come out and try the sport.  “We need to make ‘cross more accessible for more people. Yes, ‘cross already has lots of friendly vibes, but cost does matter. So, for example, it’d be great to be able to get people bikes they could borrow to try it out. I like to loan my bike out to people who want to try ‘cross. We can also let people know that they can use your mountain bike in ‘cross - you don’t have to have separate bike - at least not in our regional races. And having more clinics can help make the sport seem less intimidating.” More and Faster Ladies While ‘cross has been struggling in terms of pure numbers, where it has been succeeding is in the increasing depth of the women’s fields.  “The women’s ‘cross fields just keep getting stronger - it’s great!” said McFadden. “I see more younger women coming up through the ranks. They’re getting fast and having success.” 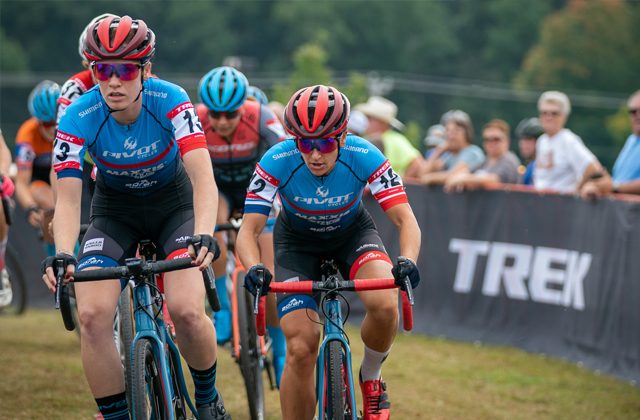 McFadden thinks that there is more opportunity for women now than there ever has been previously in ‘cross. As an example, she cited the upcoming introduction of the junior women’s category at the ‘cross World Championship, something that comes not long after the under 23 women’s category was created a few years ago. “Women’s racing is exciting to watch. People are liking that and wanting to get behind it. I hope that in the future the junior women will get their own fields at World Cups, too.” However, there is still much progress to be made at non-World Championship events.  “For example, the UCI has a long way to go in equally promoting and paying prizes for women’s races at the World Cups. At Jingle Cross, I made 300 euros, but the male finishing in the same place made 1,300 euros,” said McFadden. “I think the UCI may have a timeline in place to fix that, but it’s 2019, so that’s a pretty big discrepancy.” 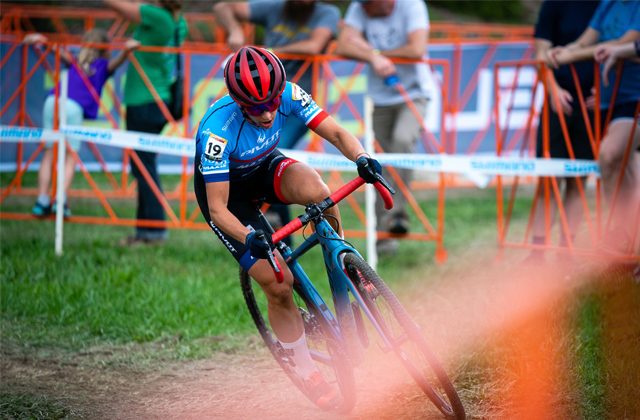 The Path to Worlds As the Pivot-Maxxis pb Stan’s NoTubes Team sets its sights on ‘Cross Worlds, there is still plenty of racing to do - both domestically and abroad.  “We’ll probably all go race in Europe over Christmas. Grant and I are hoping to head over after the U.S. National Championships. He’ll probably just go for Christmas, and I’ll hopefully stay for the next two World Cup races in January and also for Worlds if I get selected to the team,” she said. “Ruby will probably also be over there racing with Canada.” Stay tuned to our Stan’s website and social media for more updates this season on the Pivot-Maxxis pb Stan’s NoTubes Team.