One evening every week this spring, summer, and fall in Richmond, Vermont, 20 to 40 volunteers ranging in age from 14 to 80 years old showed up to build trails together. Perhaps it sounds like a familiar scene that plays out annually in many trail-loving towns, but in Richmond, there’s a little something extra special happening. Trail enthusiasts were rallying to create what is becoming a brand new network of trails consisting entirely of adaptive trails that are open and accessible to all users.

At Stan's, we believe real support means more than just standing behind our products. It means supporting the people who use those products and the trails and causes that matter to them. Each time a customer registers a Stan's wheelset to receive warranty and crash replacement coverage, we donate $10 to that customer's choice of cycling-related cause, advocacy, or trail maintenance group. Richmond Mountain Trails, a non-profit established in 2017, is one of many organizations benefiting from our Stan’s Connection Program.

Imagine you’re mountain biking along one of your favorite trails and something goes awry in that way that sometimes happens to all of us. Suddenly you’re on the ground. You quickly pick up your hopefully unharmed self and bike, hop on, and get back underway. Such a scenario is not a big deal most of the time for most mountain bikers; however, coming off your bike is a huge deal if you’re paralyzed and ride an adaptive bike.

The challenges adaptive riders face on many trails were fresh in the mind of Richmond Mountain Trails (RMT) President and Co-Founder Berne Broudy after she rode with her friend Greg Durso, a local adaptive cyclist and Director of the Kelly Brush Foundation. That was around the same time that RMT was invited to build trails on 256 acres of private land in Bolton, Vermont, a town that’s technically separate from Richmond yet shares the same zip code.

Broudy had observed how difficult it was to ride an adaptive bike on existing trails. She saw firsthand, for example, how Greg had to ride with friends who could stop and help him get across all the too-narrow bridges.

So naturally, when RMT’s board members were deciding exactly what kind of new trails to build and how, the topic of adaptive trails came up.

“We had discussed adaptive trails in the past and the importance of them, but then there was a magical convergence of opportunity. At our board meeting one night, everyone got excited about the idea of building an adaptive trail network,” said Broudy. “This spring, we broke ground on what will be Vermont’s first trail network that’s designed to be 100% adaptive-friendly. Some networks are trying to retrofit, but we’re the first brand new one. We had the chance to start from scratch.”

“Adaptive ridership is chicken and egg,” she continued. “No one knows how many adaptive riders there are, but there could be a lot more if there were trails to accommodate adaptive bikes. Look at adaptive skiing, for example.”

The new trail system is located on private land that’s used for both recreation and agriculture. Run Amok is a maple sugaring operation also on site.

Named “The Driving Range” because it’s on land that used to be a driving range, the new trail network is near Burlington, Vermont’s largest population center. Once constructed, It’s expected to help take the pressure off the two popular, heavily used, existing trail networks that it sits between: Cochrans in Richmond and Perry Hill in Waterbury.

While the sport of cycling is working toward becoming more inclusive, there are still a lot of misconceptions about what makes a trail adaptive and how fun adaptive trails are or aren’t for traditional riders to pedal.

“I think some people think accessible trails are just like a gravel sidewalk,” said Broudy. “We want to show all mountain bikers that having universal trails doesn’t lower the fun factor. It just makes them accessible for all.”

Bec Wojtecki, Director of RMT, added, “We want to demonstrate that this trail network will be fun for everyone. We’re not downgrading trails to make them adaptive.” 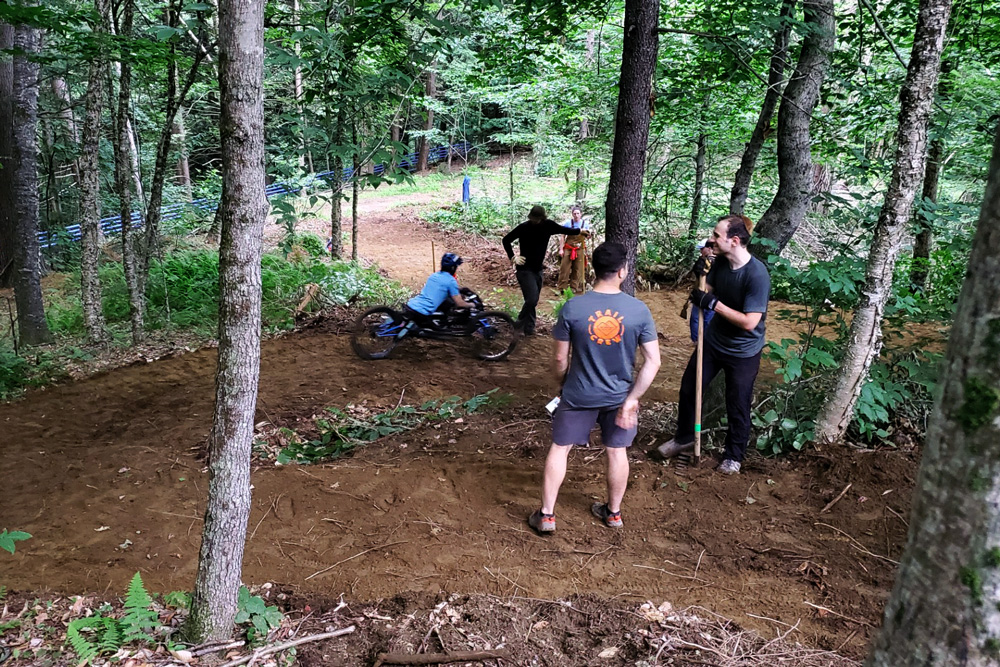 Adaptive trails need to be somewhat wider than what many people think of as old school singletrack, and climbs need to be less bermed.

“Adaptive bikes are typically three-wheeled bikes that are 36 inches wide, so your bridges have to be wide enough to accommodate them,” said Wojtecki. “We aim for a width of about four feet.”

“Camber is also important. While adaptive bikes have good clearance to get over obstacles, the trails have to be fairly level. We can’t have overly steep berms that might tip an adaptive rider over.”

And while Broudy pointed out that adaptive bikes are super capable going downhill, there are some special considerations to keep in mind while designing trails for adaptive riders pedaling uphill like creating pull-offs. An adaptive rider might need to stop mid-climb to take a break or let another rider pass, and they need the space to be able to do so.

What’s been tricky is that there just aren’t a lot of resources out there for people who want to build adaptive trails. Broudy said that when they started building trails at the Driving Range, the only trail building guidelines available to them were for bike parks out of Kootenay in British Columbia, Canada, a place vastly different from Vermont in terms of terrain, landscape, and soils.

What that has meant for Richmond Mountain Trails is a lot of learning by first-hand experience.

“We’ll build a section of trail, then Greg rides it with someone who has a can of spray paint,” said Broudy. “If corners aren’t done well, that person will paint what the corners need to be. Then volunteers will fix it immediately, and Greg will go back and test it again.”

The Driving Range trails are being built using a mixture of machines and hand labor. To date, more than a mile of the two-mile climbing trail has been constructed. But while working on the climbing trail, trailbuilders realized that if they just modified a few corners to make them more bulbous, they could also have a fantastic adaptive green trail going down, making a bi-directional green [easiest level of difficulty] trail.

Volunteers are more than two thirds of the way through hand building the first downhill-specific trail, and Mountain Trailworx has completed building a downhill jumpline with A and B lines. Eventually there will be one uphill with multiple descents coming off the top and the midpoint for a yet-to-be-determined total trail mileage. There will be challenging climbs, flowy descents, technical features and lots of blue and black-level trail options. All trails will be adaptive mountain bike (aMTB) accessible because Richmond Mountain Trails believes that while the mountain bike community has always felt like a place for everyone, we can’t really call it inclusive until we create truly inclusive trails. 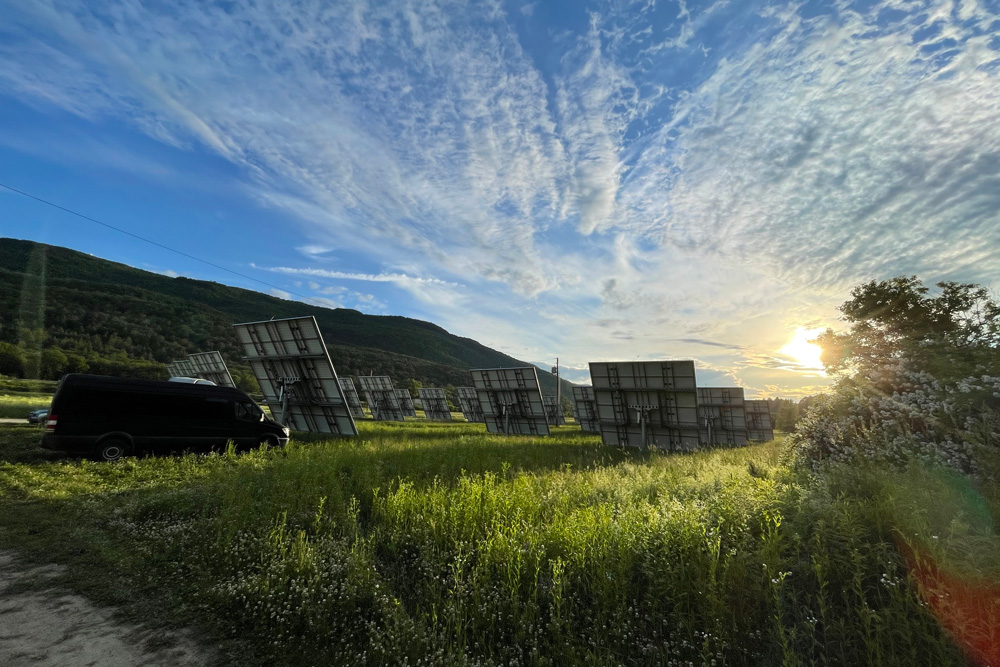 It Takes A Village

RMT’s board, which is all-volunteer, has put in countless hours since last March to bring the Driving Range to fruition. Rob Galloway, RMT’s “Trail Boss” and Vermont Adaptive Mountain Bike Instructor, and Max Krieger, who has helped plan all the trail work at the Driving Range, have dedicated hundreds of hours on weeknights and weekends all season along with local volunteers.

But RMT board members weren’t the only people excited about such a project. “We’ve had 1,600 hours of volunteer labor put into this project to date. While other clubs in Vermont stopped doing trail days in June because they just wanted to ride bikes, we kept working,” said Broudy. “The Vermont Mountain Bike Association (VMBA), which has been tracking all 29 of the chapters’ volunteer hours all summer, told us that more than half of all the MTB volunteer hours in the state of Vermont this season were put into our project.”

Not everyone is a volunteer, but almost everyone involved in building the trails is local.

“We hired Dana Cabrera from Mountain Trailworx for our first machine-built downhill. He got his start building trails here in Richmond when he was 13 years old,” said Broudy. “He built one of the most popular trails in Vermont when he was 14, and now he’s a professional trail builder. It’s been great to watch him learn to design and construct a technical descent that is an adaptive trail.”

“Every ascent and descent has to be adaptive-friendly in this trail system. There can be other alt lines, but everything has to be accessible.”

Grants from Suncommon, a solar provider, and Vermont Mountain Bike Association initially got the Driving Range trail building off the ground. What’s kept the work going are grants from community organizations ranging from local banks to Burlington Beer Company and Phish’s Waterwheel Foundation as well as private donors and club members. 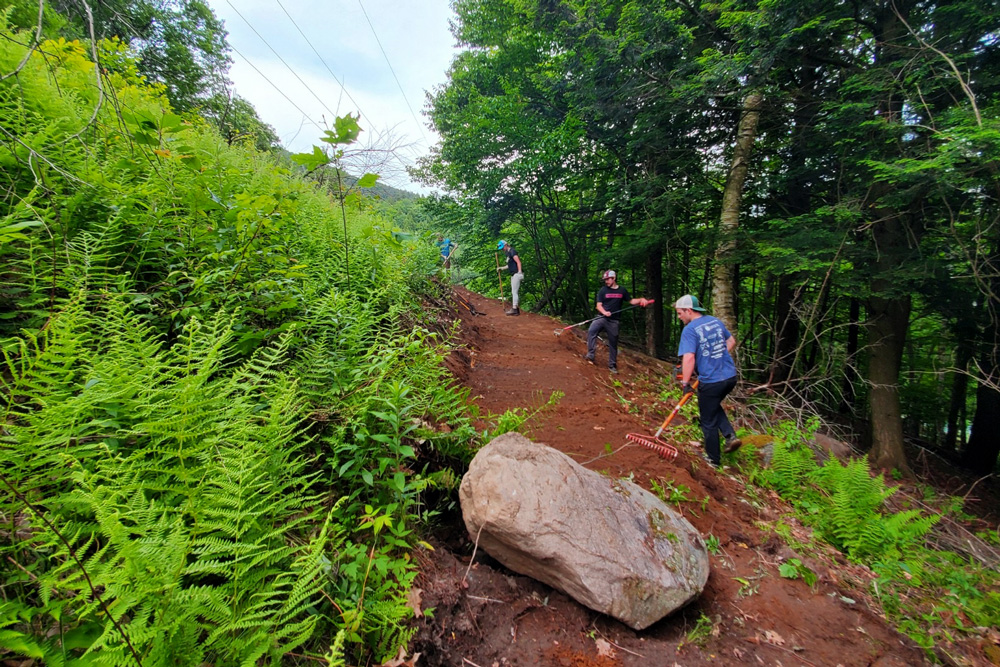 The thing about building trails is that it’s not just about building trails. There are also amenities needed to support the trail users. That’s why Richmond Mountain Trails is in process of building a 53-car parking lot that will be not just for mountain bikers, but also for climbers, cross country skiers, road bikers, hikers, and hunters.

“We believe that building trails is great, but to build trails that the entire community sees as positive, you also need to provide the infrastructure,” said Broudy. “With this project. We’re trying to set a standard for how mountain bikers can be good citizens.”

Eventually, trails in the Driving Range system will be part of the Velomont Trail, which will encompass 500+ miles of mostly singletrack trail going from Canada to Massachusetts. Some trail networks already exist along the route, and connectors are also being built in between them. When completed, the Vermont Trail will be the longest singletrack mountain bike trail in the U.S. with 35 huts and hostels built by the Vermont Huts Association. Riders will be able to connect 30 communities together en route or just explore a subset of trail systems along the way.

As the miles of trail start to add up at the Driving Range, adaptive riders are looking forward to enjoying a trail system that’s fully accessible to them.

At the last trail work session of the season, Durso told the crew of volunteers, “I have no idea how to tell you what it means to have this place to come to. I don’t just mean the trails, but a place where I belong.”

Stay tuned to TrailForks, where the Driving Range trail system will be mapped online to help all users get started exploring.