Our obsession with testing stuff extends to more than just sealant and wheels. Way back in 2009, our lead engineer Derek Bissett, started experimenting with mixed wheel sizes. Some of you might remember those Trek 69ers that had a 29" wheel up front, 26" wheel out back, and root beer color all over? Derek had one. There were good things and bad things about the bike, but, long after those disappeared, he continued to think there was something worth exploring with the whole "mullet bike" idea. 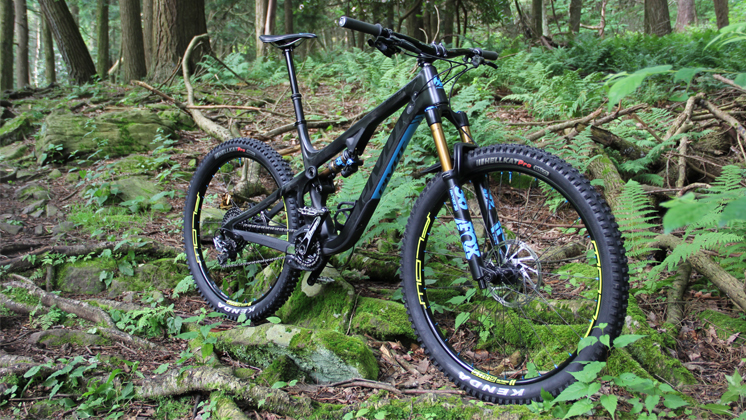 SNT: OK, so we hear you didn’t build up your bike with different wheel sizes just because the cool kids were doing it. You didn't just do this to be like Martin Maes?

DB: Yeah, it might seem like it because of the timing of my building up this bike, but I was sold on differently sized wheels after I got my Trek 69er in 2009. 29ers were pretty new at that point, and the 29” front wheel was huge for the extra traction it afforded me, but the downfall of the 69er was that the 26” rear wheel on a hardtail created too much of a dissimilarity in terms of how the bike felt in the front and rear over rough terrain. Yes, I had 110mm of front travel, but back then I was still on tubes [audible gasp from interviewer] and would end up pinch flatting the rear tire when the rear wheel slammed into whatever the front wheel ran over. It was hard to manage that dichotomy front to back. Where it rode nicely was on loamy trails and through tight turns where your speed came from your ability to whip your bike around.

Stan’s NoTubes: What's your background and what kind of riding do you like to do?

Derek Bissett:  I’m a pro level enduro racer who is becoming more casual, so I wasn’t looking for a full-on race bike. I want to be able to do some enduros here and there, but I also want to do all day backcountry rides without feeling the unnecessary weight that comes with an enduro race bike. I’m based in State College, Pennsylvania, and ride a lot in Rothrock State Forest. It’s terrain that favors a bike with some suspension. You don’t see a lot of cross country bikes around here because they get a beating and don’t hold up.

SNT: Tell us about your subject here: why the Pivot Mach 5.5?

DB: It’s one of the few frames or bikes on the market that have dissimilar travel between the front and back whereas most frames have the same or even more travel in the back. In its stock incarnation, the Pivot Mach 5.5 has 27.5” wheels and 160 mm travel for front suspension and 140 mm for the rear. That 20mm discrepancy in travel can be used to offset the changes in geometry to head angle, seat tube angle and bottom bracket height that occur if I were to put a 29” front wheel on it without making any changes to the fork travel. However, I compensated for those changes by lowering the amount of fork travel to be just 140 mm, and then the kinematics of the rear suspension can still work as they were designed.

I’ve also always generally been a fan of dual link bikes because they give you a more optimized axle path so that the bike pedals more efficiently, and the axle path moves out of the way of obstacles letting you roll over things a little bit better.

Off the shelf, the Pivot 5.5 is not a bike that’s overly slack. It seems like the trend right now is to make bikes with 64-degree head angles and 75-degree seat angles [editor's note: this is now up to 78-degrees and climbing].

SNT: So about as ideal as you can get for the mixed-wheel size test, and the right body position for your trails and how you'll be riding this one?

Yes. As someone who’s in the middle of the country and pedals their bike, even on flat ground, your 75-degree seat angle is not the optimal place to sit. Super steep seat angles and super slack head tube angles don’t make a great trail bike. When you’re on undulating ground, you want a more neutral position, like on a road or gravel bike. 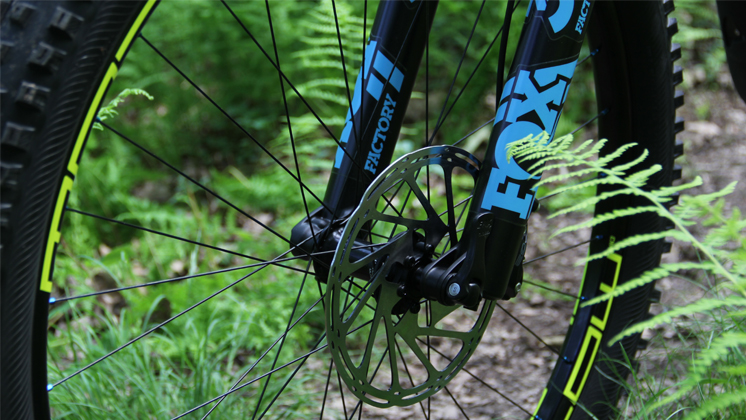 SNT: OK, let's go full nerd. Word is you put a lot of thought into the fork and how fork offset would affect overall geometry. What was your thinking there?

DB: I went with a (larger) 51mm offset on my fork instead of the 44mm offset many 29er forks use currently because I wanted the more agile steering that comes along with that to compliment the moderate head tube angle of the bike. I didn’t want it to have a floppy front end. That’s what can happen when you put a short offset fork on a bike with a slack head tube angle. These changes help the bike operate at slow speeds and tight corners, both of which are common for the riding around here. Bikes with 64- or 65-degree head tube angles and short offset forks are good for rolling at speed, but they’re not good for super tight corners.

SNT: How would you describe the ride characteristic you're going for with the 29" wheel up front and 27.5" wheel out back?

DB: 29” wheels are generally liked because they are perceived to offer increased cornering traction due to their greater contact patch. This is especially important for a front wheel, yet putting a 29” rear wheel on a bike has some drawbacks. I’ve always liked a bike with differently sized wheels because it addresses traction up front and maneuverability out back. 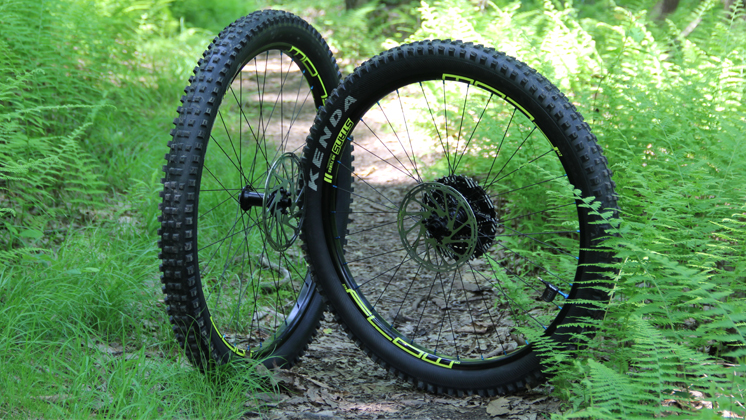 SNT: Though you're running different diameter rims, are the widths the same? Same model rim?

DB: Yes. Stan’s Flow MK3 wheels with a 29mm inner width are the perfect choice for the kind of riding I do. 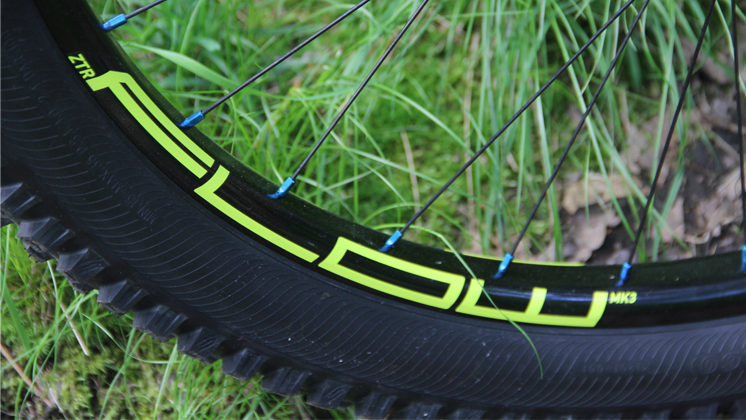 SNT: What would you say the main downsides are to the 29" rear wheel?

DB: A 29” wheel on the rear makes frame design challenging as it’s harder to get the shorter rear end you want for a playful kind of a bike. There is also the gyroscopic effect of the rear wheel which is a big factor in how a bike rides. And finally, a rear wheel with a smaller diameter is a stronger wheel because of how the bracing angles work out--although I don’t personally have wheel reliability issues with my Stan’s wheels.

SNT: A lot of people probably don't think about the gyroscopic effect you mentioned. Can you explain how that might affect handling while riding?

DB: You can feel gyroscopic effects when you spin a wheel while holding its axle in your hands and tip it from side to side as if you were cornering. On the front, flopping the wheel while riding can help you upright the bike. Gyroscopic forces can be manipulated [by steering] to help you corner. The rear wheel is rigidly attached to the entire frame, so the gyroscopic forces of the rear wheel are tied to the entire attitude of the bike. I’m not saying that you don’t want some of those gyroscopic forces of the back wheel--you just don’t want too much, or it will hurt you in pivoting the bike through turns and around obstacles. I think the use of the two different wheel sizes improves the agility and handling of a bike by taking advantage of the imbalance of the gyroscopic forces between front and rear wheels.

SNT: Definitely something a lot of riders probably don't consider.

I know that firsthand from my motocross experience. When I've bent a rotor and had a brake dragging enough to stop my wheel from rotating after I take off, it’s resulted in a loss of control. When I’ve taken off that first big jump with an unknowingly bent rotor, I’m suddenly just drifting in the air instead of feeling the sensations I’m used to feeling. It becomes instantly apparent that something is terribly wrong. 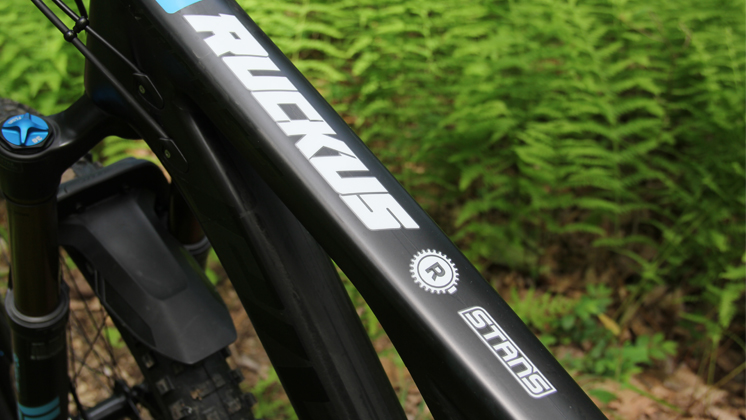 Scroll down for more photos and details re: Derek’s bike. 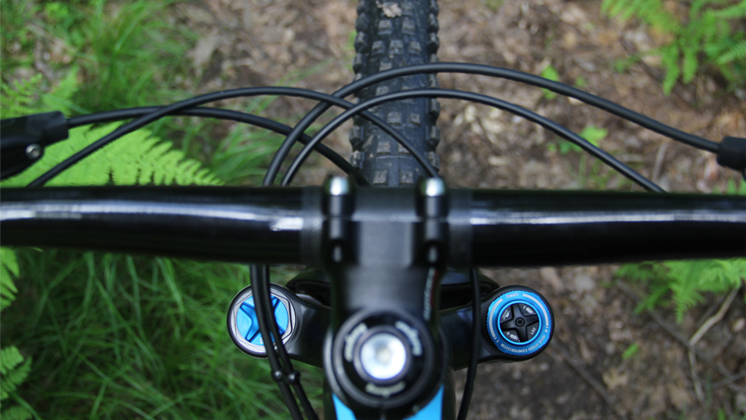 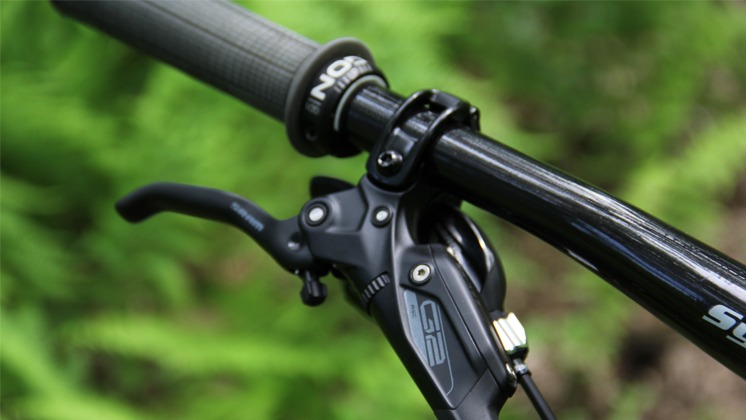 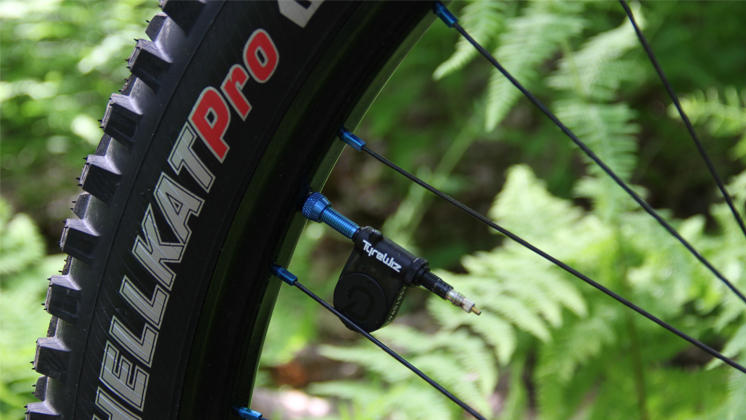