Sticks and Stones by Brice Shirbach

Sticks and Stones by Brice Shirbach

"I love the self-filming process. There’s something very meditative in there for me, and recently I decided to go the solo route for a concept I’ve been chewing on for a couple of years. I filmed “sticks & stones” on some local mid-Atlantic trails with a goal to create a stylized, dark, gritty, and chilly homage to the nuanced yet brilliant riding opportunities afforded to east coasters during “stick season”. The dirt is ever damp, the sight lines free from obstruction, and the chill in the air a welcome respite from the oppressive heat and humidity of the summer. There's a surreal quality to riding in the woods this time of year, and it's one of my favorite things about riding bikes on the east coast."

Stan's NoTubes: Can you run us through the process of shooting this self-shot video? Camera set-ups, remotes, number of takes per trail section, etc.

Brice Shirbach: This was a really fun and interesting project to work on. I've been producing self-filmed videos for a very long time, going back to my early days at Pinkbike and making these little :90 "Local Flavors" videos for the "EastBound and Down" series. I still have some regular projects that involve this process, but for "sticks & stones" I wanted to do something different. A lot of self-filmed videos, my own included, will utilize POV footage to help glue tripod shots together while also providing the video with a very different perspective and dynamic movement. It's easy and highly effective, but for this I wanted to challenge myself to make something without the use of any POV footage. One of my primary goals was to produce something on my own that had the look and feel of a video that utilized a filmer and a rider, instead of a rider/filmer. Filming on local trails was a big part of how I was able to accomplish that. I had plenty of time to really dial in the process, I knew exactly which trails I wanted to film on and how to go about getting the most out of them, and I was also able to spend a lot of time working on the trails themselves and dialing them in. From a technical perspective, I knew I was going to need to be able to mix up angles and compositions, and in order to do so I needed to utilize a few different cameras for this.

Camera A was my Panasonic Lumix S1. I shot everything in 4K at 24fps for a cinematic quality and because I knew I wanted everything in real time and no slow motion. The S1 had a 24-105mm lens on it at all times, giving me a good range from semi-wide to telephoto, and for compositional purposes I think I kept that range between 24-75mm. Anything more tends to "pancake" the image, meaning the depth of field is altered as the background and foreground appear closer to the subject, which can affect the way we perceive speed when watching a rider ride through the frame.

Camera B was my GoPro MAX. It's a 360 camera, and while often used for POV purposes, I had very different plans for this project. This little ultra wide angle camera was what I used to create the whip pans throughout the video. The 360 video files come from 2 separate 5.7K videos recorded simultaneously by 2 separate lenses on the camera; one on the front and one on the back. In post production, there's a program that allows you to first establish the aspect ratio, and from there you can create keyframes which is where the "movement" comes from. It's a bit tedious, and obviously you're limited to a very wide angled shot every time, but in the end it's a great way to break up the tripod shots and it really helps to convey a sense a speed.

Camera C was my Skydio2 drone. It's well known as an autonomous drone that can track and follow its subjects, but outside of the desert southwest or alpine terrain, it's pretty hard to just let it fly on its own while on the bike. That's due to the obvious challenges and obstacles that forests and trees present. However, it has a number of other modes that allow for some really interesting perspectives and I especially appreciate the "cable cam" mode, which I used for this video. You simply set point A and point B, adjust the speed with which you want it to travel, then let it fly.

I filmed on 4 different trails for this, and spent a full day on each. It was important to me that I really capture this as effectively as possible, so I did 3-4 runs on average per shot, and ended up with over 80 total shots, half of which are what make up this project. The other big component to this was obviously post-production, or editing. I knew I wanted this to be a black and white video, but I also wanted it to have a gritty feel to it, hence the aged 16mm appearance throughout. Audio was a very important element to this as well, and while I simply used a shotgun mic for most shots, I had to get creative for drone audio as obviously you can use audio from that device or you'd only hear the whir of the drone itself. Instead I used a wireless lav microphone to record sections of trail, and then in post production edited the audio to match the distance of the rider from the camera. 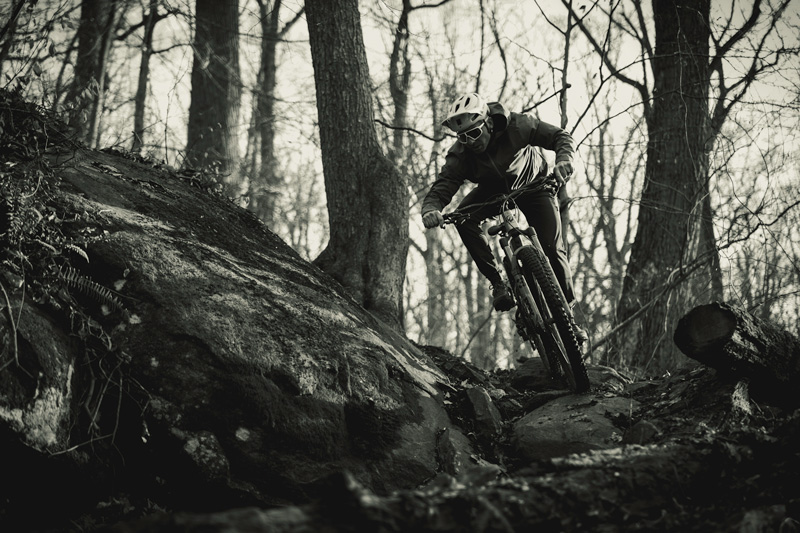 SNT: Do you have any tips for an aspiring mountain bike videographer or photographer?

BS: I think that the more you can formally educate yourself on this art form, the better. I went to college to pursue photojournalism, but shifted to video production halfway through, and carry some of the tenets from both of those disciplines with me today. More importantly though, I think it's important to really break down photos and videos that move you, and work to better understand what it is about those that have made such an impact on you. From there it's all about putting in the time to see how you can achieve that style or quality of image. It's not about copying someone or being formulaic, it's about getting a better understanding of how to create an image that moves you and growing your own style from there. The biggest thing, in my opinion, is to never get complacent. I think there are a lot of veteran photographers who get to a point in their career after success who aren't willing to learn from others, and I feel like there absolutely always something to learn and always room for growth. Every single time I set out on a new project, I'm looking to grow. Sometimes it's nuanced and incremental, and sometimes it can be a leap, but either way it's an ever present goal. 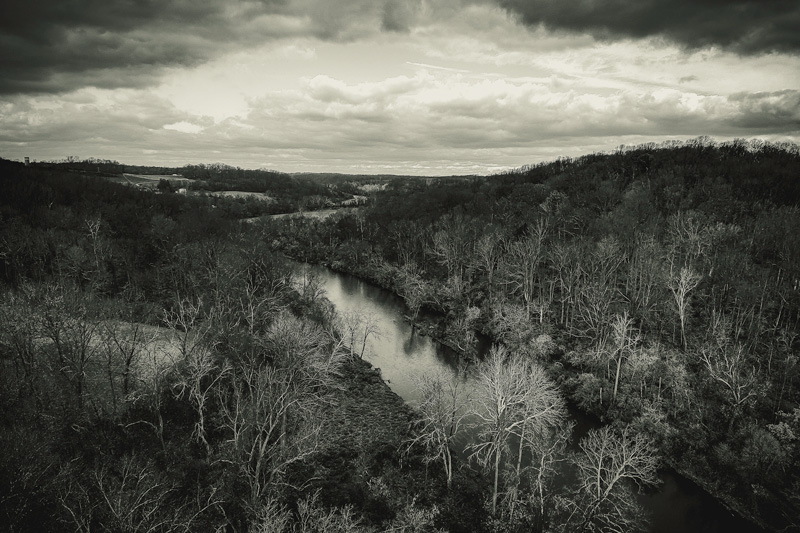 SNT: We've noticed many professional athletes becoming more serious about their content creation, with some making a full career shift from racer to Vlogger completely. What do you think the future holds?

BS: I think it's pretty great to see storytelling getting equal footing to racing within the MTB space. I am still a huge fan of racing, and every now and then have the itch to get back into it myself, but racing is only a small part of the joy that riding bikes in the woods brings us, and as humans are an inherently communicative species, it makes sense that we use stories a way to elevate our sport and community. I think that MTB and the ski/snowboard industry have a huge parallel in this regard. While competition is certainly a big part of both of those industries, there are pro ski and snowboard athletes who have spent decades working exclusively on video and media projects, and while MTB is a couple of decades behind them, I think we're seeing a similar approach in our industry. I think the one thing I would caution is that there's a difference between a rider who wants to tell stories and create content because they themselves are moved by it, and riders who feel like they have to create content because it's simply expected of them. What I think is starting to happen is that the marketplace is kinda being flooded with "content creators", and it can create a lot of noise making it hard to sort out the more authentic voices from the people who are simply ticking off boxes for the algorithm and looking for clicks. It kinda devalues things, but I also think that will sort itself out sooner than later. Ultimately, I think that we will start to see a resurgence in quality over quantity, and hopefully that means more feature-length films, print magazines reestablishing themselves as the pinnacle for photo and editorial content, and more meaningful conversations through social media.

SNT: Can you share one pro tip for riders to ensure a positive tubeless experience?

BS: I could share one, or I can share a handful of quick tips that I think are particularly useful, so I'll do the latter. First, shake your sealant bottle up before pouring it into your tire during setup. The crystals that ultimately help to create the seal can settle at the bottom of the container, so if you don't shake before you pour, you won't see the results you're looking for. Also, refresh your sealant more often than you currently are. I know people who will go an entire life of a tire without refreshing their sealant, which means that by the time they change their tire, they're rolling around with a big old ball of rubber inside their tires, which obviously ain't sealing anything if they were to experience a puncture. I try and do mine every 3-4 weeks, though Stan's tells you to do it even more frequently if you can. Flats suck, so just take a few minutes every few weeks to add some fresh sealant to your tires to help avoid them. Finally, check your valve core every now and then. A clogged valve core can cause leaks and make it difficult to pump air into your tires. They're easy to remove and clean, and are also inexpensive, so if you'd rather just replace it altogether, it's no biggie.

Posted in: Our Riders