Two German friends, Robert Krauss and Markus Zander, did what a lot of us love to do. They took a mountain bike vacation in Whistler, B.C. However, after lots of riding and some beer, they were motivated to do more than just head home and settle back into regular life. They were inspired to start their very own mountain bike company. That was in 2006. Fast forward to 2020, and Propain Bikes has become a thriving brand that attracts customers from around the world. We caught up with Propain’s CEO David Assfalg and COO Florian Gärtner to learn more.

Stan’s NoTubes: What kind of mountain bikes does Propain make?

Propain Bikes: We mostly make gravity-oriented bikes because we come from a downhill background. Now we also make enduro bikes and all mountain or trail bikes, depending on what you want to call them, and e-bikes. It’s hard to differentiate among some of the categories, but we’ve put a lot of effort into the design of all of our bikes.

Every single one of our bikes is a full custom bike, and you can get them in carbon or alloy. There are different color options for frames, grips, saddles, and different build kits.You can swap out only a shifter or a rear derailleur or cassette - you don’t have to pick a whole group. You can also swap wheelsets. If you don’t want a complete bike, you can just order a frame. 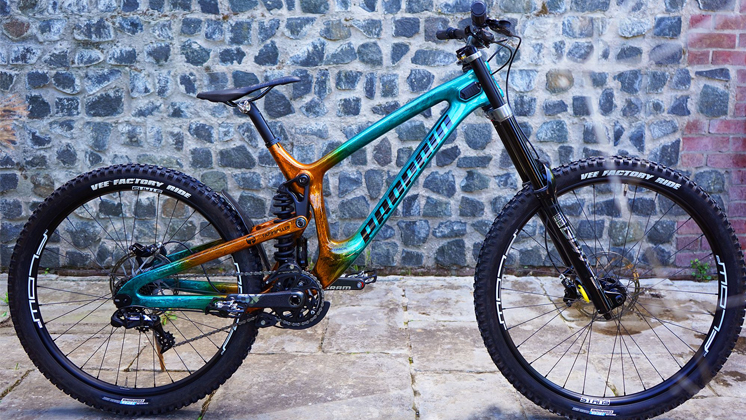 SNT: Where are your bikes designed, manufactured, and assembled?

PB: We design everything here in southern Germany. Then we manufacture and paint the frames overseas -- exactly where depends on the model. Assembly is done to spec in Germany.

SNT: You’ve experienced some impressive growth. Tell us about that.

PB: After returning from the Whistler trip, our founders knew they wanted to begin with a downhill frame. The first one was done in 2009, and by 2011, they were really ready to go. We started Propain Bikes GmbH in 2011 in a 28.5-square-meter garage.

We stayed in the garage for one year, and then we moved into an old car dealer’s place with 200-300 square meters of space. We grew so much that we moved again 2.5 years later into a building in Vogt which we own. It’s where we do production.

Now we have three production places, and we’ll put in a new one at the end of the year, another 2,000-square-meter facility. There is no end in sight. It’s kind of crazy. 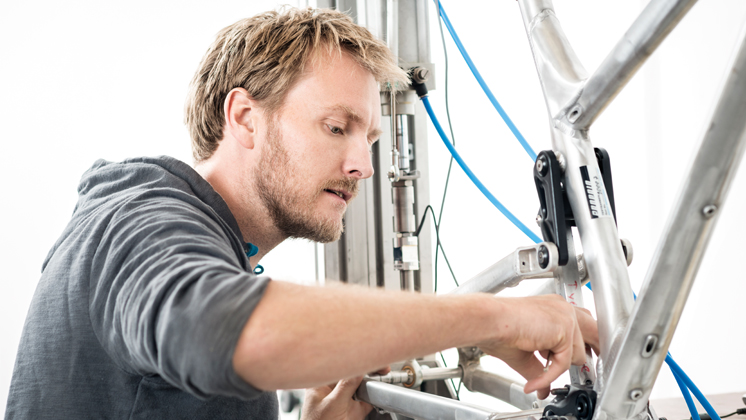 SNT: There are a lot of mountain bike brands out there. Why would someone choose to buy a Propain bike?

PB: That one’s easy to answer! (Laughing). We always build up the best bikes for us to ride.  Every bike is one that we’d want to ride.

The other reason is how much you can customize your bike. You can choose the model, color, accessories, sticker kit, brakes, and wheels. You get to build up your very own bike.

And we are really cool guys! (Laughing) 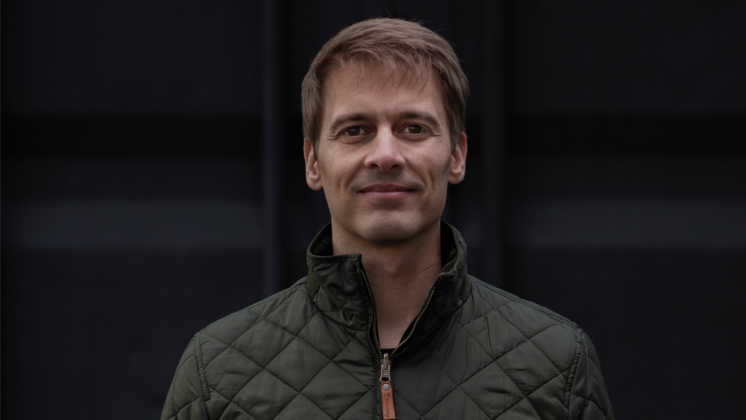 SNT: Speaking of choosing your own wheels, we can’t help but notice that many of your bikes come with Stan’s wheels - why?

PB: Some of us have been riding Stan’s for 25 years. We’ve been super happy with the ride quality and specs of the wheels, which have been successful for us as a brand. I guess people like to smash wheels, so it’s a big thing that we don’t get complaints from customers about Stan’s wheels. We also don’t get service requests for them.

When Propain started, we were a small company and did not require large quantities, but Stan’s has supported us like we were a big company from the beginning. Stan’s is easy to work with!

SNT: You also offer kids’ bikes - something that not every MTB brand does. Why?

PB: It’s because we have kids! (Laughing)

One of our sons once asked, “Why do older people have cool bikes, and I don’t?” We got the point -- we needed to have cool kids’ bikes. And now we all have two or three kids.

Our mountain bike line-up starts with 20” hardtail and full suspension bikes. Then we have a 24” wheeled bike that’s convertible to a 26” bike. They are proper mountain bikes for kids whether they want to just go ride around or go ride at a bike park. 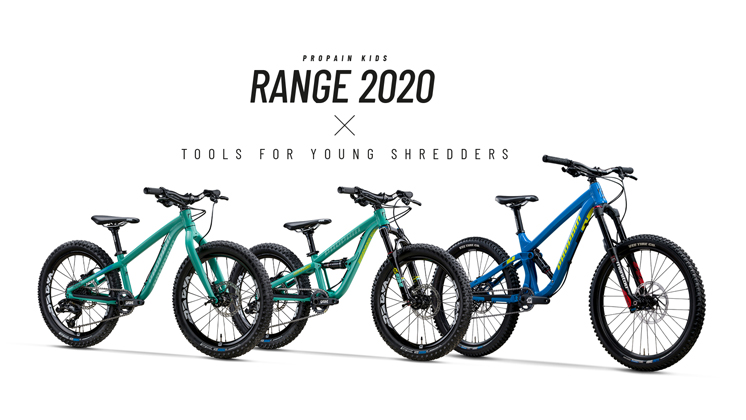 SNT: You’ve been going direct-to-consumer since 2011, and more recently - this spring - you’ve entered the U.S. market. How is that working out?

PB: Having worked in shops since age 17, we didn’t think Propain had a chance to get in with dealers back in 2011. That’s why we decided to go direct to consumers.

With just starting U.S. distribution, we’re gradually introducing models there. We began with the most popular ones, and right now the customization options are more limited, but we plan to eventually offer everything. It’s been a challenge to set up, especially with the coronavirus.

COVID-19 slowed down the process of bringing everything to the U.S. When the pandemic started, it felt like the whole plan was paralyzed. Fortunately, it only took about three weeks, and then people started to get back to getting in touch with us and asking about the bikes. Now the orders are quite good.

SNT: What’s different about the U.S. market relative to other places based on your experience so far?

PB: What is interesting is that we see different preferences in different places. In general, there is still a big demand for 650B wheels and alloy bikes, although in the U.S., there is more demand for 29ers. It seems like Europe is starting to change now, too, with more demand for 29ers than there was. But no matter where you are, there’s still no reason to do 26” bikes - except to give kids more wheel size options as they grow.

When we updated our enduro bike, the Tyee, we introduced 29er wheels, but we didn’t drop 650B wheels as an option. We also offer the frame in both alloy and carbon. People are quite happy because we don’t just get rid of old standards and force them into new standards. We pick things instead based on what we like to ride. 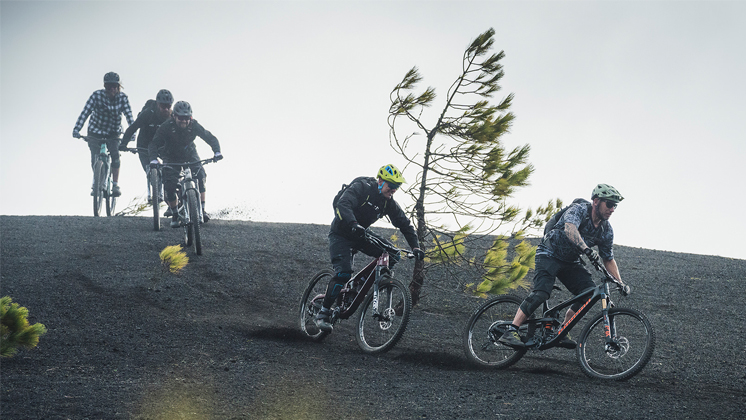 SNT: Considering the pandemic and Propain’s growth, what’s next?

PB: We’re planning to launch some new models, and now we’ll launch them in the U.S., too. Launching models is harder and more complicated because you can’t plan launch events like you used to. However, people are still interested in bikes and enjoying nature in their own area. They are realizing more than ever how beautiful our own planet and their country are.

While I don’t think we’re profiting as much from the bike boom as many bike shops, it’s still been crazy for us. We think that while some of our growth is due to coronavirus, some of it is also just due to the new models we introduced in January and our growing popularity.

SNT: Are there any long term effects of the pandemic or cycling industry trends that you’re expecting?

PB: That’s a tricky question. In Germany, it seems like mountain biking is going from a side sport to a main sport. People are staying home, and they can’t ski because it’s too hot, so they are going riding. People want to take up a sport they can do directly from their house.

SNT: Some people are familiar with your brand through the team you sponsor. Tell us more about the team.

Now we put more money and effort into the team, and we’ve gotten way more professional over the past couple of years. It’s a great way to develop new products. We get lots of good feedback from the team when developing downhill, enduro, and trail bikes, and they do lots of photos and videos for us - it’s not just racing.

First we had riders like Phil Atwil [who is no longer with the team]. Now we have George Brannigan, Luke Meier-Smith, Henry Kerr, and Luke Williamson. They race the Downhill World Cup and also some Enduro World Series events, when they are not cancelled due to COVID-19. We’re starting to see them return to some racing, but the virus is still out there and an issue. We’re not panicking about it, but we’re also not rushing a return to racing. 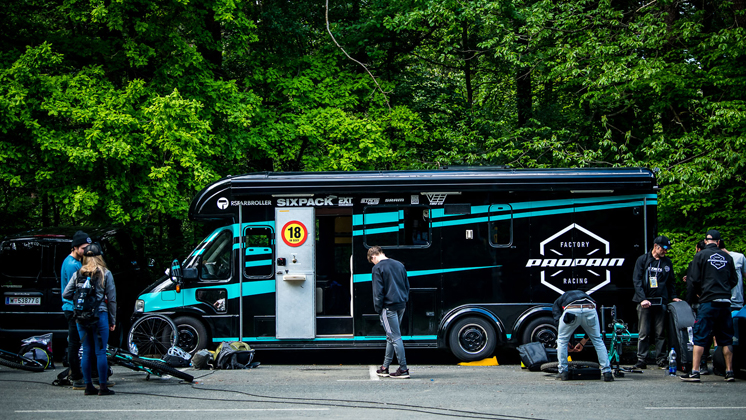 All images courtesy of Propain Bikes.